Luther is to Blame for Modernity, Right? 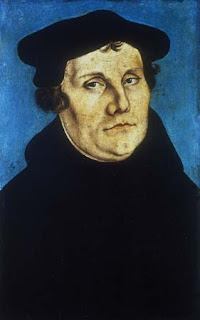 Religiously motivated anti-modernists, which is to say traditional Roman and Anglo Catholics (and a smattering of Eastern Orthodox) have often placed the blame for modernity - particularly secularism and the paramountcy of the freedom of the individual - at the feet of Luther. But it is impossible for anyone with some actual familiarity with Luther's life and writings that goes beyond the caricatures of his enemies to accept the basis for such a charge. Those sympathetic to Luther have instead pointed the finger at the Renaissance, a charge which on the surface at least has more plausibility.

But what if the truth is infinitely more complex than either of the above theses allows for? What if secularism and the freedom of the individual actually developed inexorably out of the Western Christian tradition itself, with apostles, medieval theologians, friars, bishops, canon lawyers and even popes all playing their parts?

That is the thesis which the scholar of intellectual history, sometime Oxford lecturer in political thought and Fellow of Keble College Larry Siedentop sets forth in his latest book, which describes how modernity and the paramountcy of the individual that is the hallmark of Western liberalism developed over two thousand years (without once mentioning Luther!):

"The view that the Renaissance and its aftermath marked the advent of the modern world - the end of the "middle ages" - is mistaken. By the fifteenth century canon lawyers and philosophers had already asserted that 'experience' is essentially the experience of individuals, that a range of fundamental rights ought to protect individual agency, that the final authority of any association is to be found in its members, and that the use of reason when understanding processes in the physical world differs radically from normative or a priori reasoning. These are the stuff of modernity."

To expand upon a 'new media' adage, if politics is downstream from culture, then culture itself is downstream from religious belief, and this book demonstrates it with copious examples, beginning with the somewhat stifling cult (i.e. system of religious beliefs & devotions) that surrounded the family in Greek and Roman antiquity. Siedentop paints with broad strokes - he has to to cover so much spiritual, psychological and intellectual history in 400 or so pages - and specialists in the areas he covers will undoubtedly have their quibbles, but anyone vitally interested in the spiritual history of the West will benefit from reading this book. His omission of the Reformation is a curious lacuna, but it at least goes to show that a major scholar can account for modernity, secularism and liberalism without invoking an old trope.

An inexpensive paperback Penguin/Viking edition is available where good books are sold. Recommended!
Posted by Acroamaticus at Monday, September 05, 2016

Dear Pastor Mark, I have long regarded with alternate bemusement and contempt the tendency of traditionalist Catholics to place the blame for all the ills they perceive at the hands of the Protestant reformers, or indeed of any other so-called heretic, including Renaissance humanists or post-enlightenment modernists - as if causes and effects were so dissectible or quarantinable! As our experience of personal development shows, so I believe, the DNA of every moment of the present is the result of multi-stranded experience and inter-activity. We are the offspring of a myriad of ancestors. A parallel may be found in a particularly insightful study of the origins of liturgical deconstruction and change by Dr Geoffrey Hull, called “The Banished Heart”, argues that the post-Vatican II programme was not the result of modernist theology per se but a logical outcome of centuries of Western thinking, in which mystery and organic development was jettisoned in favour of a Roman proclivity for juridicism, and for promoting a kind of Papal or episcopal legal positivism. Dr Hull points to the very early tendencies of the Western Church to set itself at odds with the Eastern Church’s spirituality and theological traditions as the ultimate root of the 20th century devolution. In other words, this was a question of cultural psychology rather than discrete manifestos. The same would undoubtedly apply, I suggest, in the case you are talking about.

But then, of course, there is another issue: namely, that your post implies there is after all a problem with “secular modernity” or “enlightenment” ‘liberalism’, and this is by no means to be accepted as a given. It is, after all, secular modernity, or a sub-set of it, that has brought about the situation where a Royal Commission into institutional responses to child sex abuse could be conceived and established, when on all indications those institutions themselves, including Churches who have consistently “had a problem” with secular modernity, would never have done what was necessary of their own accord.

As you may already know, here in the USA it is Thanksgiving day. So may you and your loved ones be blessed today!

It had passed my notice, RL.

We don't celebrate Thanksgiving, but we do have Australia Day on 26th January which celebrates the founding of our nation. However, we are very thankful to have the US as an ally. My grandfather fought in the Pacific theatre of war during WWII with American soldiers and our family hauls from Brisbane, which was General MacArthur's HQ after he left the Philippines.

A blessed thanksgiving to you and your good wife (do you have any children?).

My wife has relatives in California.