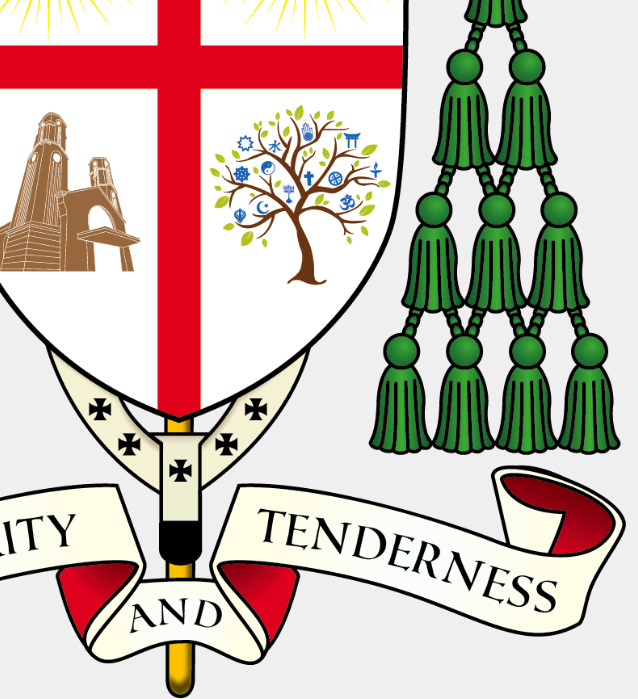 Thanks to reader Paul for alerting me to this - the coat of arms of the new Roman Catholic archbishop of Kuala Lumpur, Malaysia, being installed today. One wonders what the apostle Paul would have made of this - the point of interest, in light of our recent discussions about Roman Catholicism and Islam, is the tree in the bottom-right panel, bedecked with symbols of the various religions, including the cross.

Let it be said straight away that contemporary Christians, at least, have no problem co-existing socially with devotees of the world's religions, especially in pluralistic Western societies... although we note that Islam is certainly less tolerant where ever it has the upper hand, not least in the archbishop's own country of Malaysia.

What is potentially scandalous about the Christian use of this symbol - by an archbishop, no less - is the implied equality of  the Christian revelation with the world's religions and the philosophical relativism which lies behind such a notion. Perhaps that is not the message the archbishop intended to convey, in which case concerned Roman Catholics might like to enlighten him as to how it could be perceived. However, in light of the joint prayers in June in the Vatican in which Roman Catholics, Jews and Muslims were invited to pray together, an act which, as I noted in a previous post, would seem to be consistent with the attitude to Islam and Allah set forth in Lumen Gentium, I would need some persuading that this is not another example of a profound confusion in Rome as to the exclusivity of worship in the name of the Triune God: Father, Son and Holy Spirit. This confusion, I might add, has been amply illustrated by Catholic commenters on this question here at the old manse.

I have a theory as to why Rome so easily tends towards this error, of which more anon, D.v.
Posted by Acroamaticus at Monday, October 06, 2014 4 comments: