The Church's Role in the Present Crisis 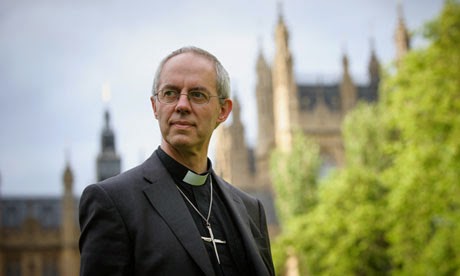 As an ex-Anglican I keep a weather eye on my former communion. The present Archbishop of Canterbury (ABC), Justin Welby, who recently visited Australia in order to fulfill his promise to visit every province of the Anglican Communion, has at times impressed me but at other times left me non-plussed. It remains to be seen whether he can rescue the Anglican Communion from its course of self-destruction - I think probably not, given the direction of his leadership so far.

Be that as it may, as the Church of England remains the established church in that country, the ABC is one of the Lord's Spiritual, which means he sits in the House of Lords at Westminster and has a say on political matters (in Australian or American terms he is the equivalent to a senator, with less political power, however strange that notion may seem to us). Last week in the Lords Archbishop Welby spoke in support of UK participation in the strategic bombing of the IS in Iraq with the aim of curtailing the group's advance and providing the opportunity for humanitarian aid to be provided to those innocents suffering on the ground. For what it's worth, I applaud the Archbishop's stance on this matter, but what I want to draw attention to here is the wisdom with which he concluded his speech in the House of Lords,

"The action proposed today is right, but we must not rely on a short-term solution on a narrow front to a global, ideological, religious, holistic and trans-generational challenge. We must demonstrate that there is a positive vision far greater and more compelling than the evil of ISIL and its global clones. Such a vision offers us and the world hope, an assurance of success in this struggle, not the endless threat of darkness."

Pope Francis has already remarked that we are in World War III; a retired Australian general and adviser to the government on international affairs has suggested the struggle against Islamism will continue for 100 years. Their voices and that of Welby are not voices that can be easily dismissed as shrill and alarmist. In the language of post-modernism, what the Archbishop is saying is that in order to prevail over Islamism the West needs more than military might - it needs an alternative narrative that offers hope and light, both to sustain us in this struggle and to dissuade and convert those drawn to the nihilistic darkness of Islamism. That is, as I see it, a challenge to the West to recover the Biblical narrative as its own story with Christ as its Alpha and Omega, and that is, in the first instance, a challenge to the churches (not least Welby's own Anglican Communion) to recover belief in that narrative and proclaim it with conviction.

Are the churches of the West up to the challenge?

Pray that they may be.

The Archbishop's speech is here in full (usual caveat - linking to it does not imply agreement with all its content).

As a postscript, let me add that I am not advocating a utilitarian view of Christianity - that it should be recovered because it will be helpful in the fight against Islamism, in the way Stalin revived the Russian Church in the struggle against Nazism. What I am suggesting is that this is a kairos moment -  an opportunity which the churches should grasp in the service of the missio Dei in the time and particular places in which God has placed us. Or, more properly, the time when God will act through us. 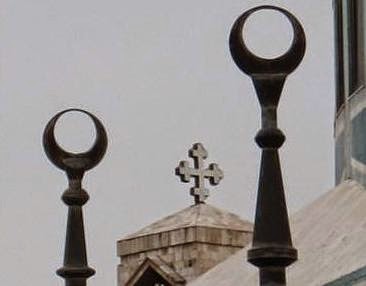 This is not the second part of this series that I was intending to publish, but as I'm not one to look a gift horse in the mouth...
“In the name of God, the Merciful and Compassionate,” [Roman Catholic Cardinal] McCarrick said as he introduced himself to the audience at a meeting arranged by the Muslim Public Affairs Council. That praise of the Islamic deity is an important phrase in Islam, is found more than 100 times in the Koran, and is akin to the Catholic prayer, ”In the name of the Father, and of the Son, and of the Holy Spirit.”  McCarrick next claimed that “Catholic social teaching is based on the dignity of the human person… [and] as you study the holy Koran, as you study Islam, basically, this is what Muhammad the prophet, peace be upon him, has been teaching.”

One can only wonder what the Chaldean Catholic Christians of northern Iraq would say in response?

The third part in the series will follow soon, Deo volente.
Posted by Acroamaticus at Sunday, September 14, 2014 4 comments: