Do Roman Catholics and Muslims Worship the Same God? Does It Matter?

Do Roman Catholics and Muslims worship the same God?

Apparently so, according to the official Catechism of the Catholic Church (1992):


841 The Church's relationship with the Muslims. "The plan of salvation also includes those who acknowledge the Creator, in the first place amongst whom are the Muslims; these profess to hold the faith of Abraham, and together with us they adore the one, merciful God, mankind's judge on the last day." [italics mine].

The catechism is quoting the Vatican II document, Lumen Gentium (Dogmatic Constitution on the Church; LG 16). While the authority of the Catechism has been the subject of some debate among Catholics, with even some bishops averring that it mixes theological opinion alongside authoritative doctrine, the doctrine taught by a Council in communion with the Pope is infallible and calls for the full assent of faith from the loyal Catholic. Therefore, one must conclude that the Roman Catholic Magisterium teaches its adherents that they and Muslims do adore (i.e. worship) "the one merciful God, mankind's judge on the last day."

Having answered our first question in the affirmative (according to the Roman Catholic understanding, that is), we now move on to our second question: Does it matter?

Firstly, Roman Catholic teaching on this subject misrepresents the teaching of the Quran, but that does not concern us nearly as much as how this misrepresentation impinges upon the Christian doctrinal of God: Allah is not "the one merciful God who will be mankind's judge on the last day". To make this assertion is to veil with error the light of the Gospel which God has given to the church as the means to salvation for all people.

The first error in the assertion that Catholics and Muslims adore the same merciful God who will be our judge on the last day is that it misrepresents Islamic doctrine. This misrepresentation is no doubt prompted by the overly optimistic view that since Judaism, Christianity and Islam are historically the three so-called "Abrahamic faiths" they share the same basic conception of God as Father and Creator. This position is intellectually lazy and religiously dissembling in that, presumably for the sake of cultivating good relations with Muslims, it feigns agnosticism in regard to the question posed by the advent of Jesus, "Who do people say the Son of Man is?" (Matthew 16:13-16), the proper answer to which leads to the confession of the divinity of the man Jesus Christ, "the way, the truth and the life" through whom alone is God the Father known (John 14:6). In fact, in accordance with the teaching of the Quran, Muslims disavow the view that Allah is to be identified with any Person of the Holy Trinity and while they acknowledge Jesus to be a prophet and messiah of the Jews they deny the Godhood of the One whom Christians confess will be our judge on the last day (when Isa returns, according to Islam, one of his duties will be to correct the errors of Christians!). The Quran declares such assertions as the Roman Magisterium makes to be blasphemous and disbelieving:


"They do blaspheme who say: Allah is one of three in a Trinity: for there is no god except One Allah. If they desist not from their blasphemy, truly a grievous penalty will befall the blasphemers among them" (Quran 5:73)

"They indeed have disbelieved who say: Lo! Allah is the Messiah, son of Mary. (Quran 5:17)

The second and more serious error in the assertion that Catholics and Muslims adore the same merciful God who will judge us on the last day is a misrepresentation of the Christian doctrine of God. The Christian God is a communion of three Persons whose nature is Love, who, in the Person of the Son, condescended to take on human flesh in order to redeem fallen humankind from the powers of sin, death and the devil, graciously leading us back into the Divine communion of love. The Allah of the Muslims is al-Jabaar, the supreme potentate of the universe who commands that all creatures submit to his will, even at the point of the sword. To identify these two theologies does not give glory to God the Father, Son and Holy Spirit but leads to the syncretism of multi-faith services.

Why does Roman Catholicism so glibly fall into the error of identifying Allah with God the Father, Son and Holy Spirit?

Email ThisBlogThis!Share to TwitterShare to FacebookShare to Pinterest
Labels: Cross and Crescent, Luther, Theology, Why I Am Not Roman Catholic, Why the Reformation Is Not Over

Lutherans Do Not Believe in Consubstantiation, OK? 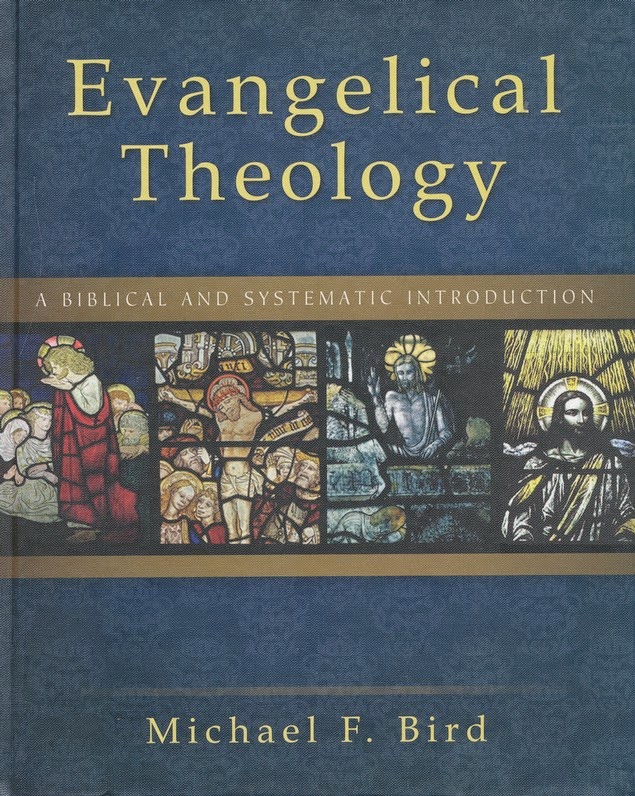 Lutherans do not subscribe to the theory of the 'how' of the 'real presence' called consubstantiation. But if you received your orientation to Lutheran doctrine only from evangelical Reformed dogmaticians, you might be excused for thinking so, for in my experience that is how they almost unanimously represent the Lutheran doctrine of the 'real presence' of our Lord's body and blood in the Lord's Supper (even the Anglican scholar Alister McGrath, who wrote a decent study of Luther's theology of the cross, did so in his Christian Theology).

The latest example of this egregious misrepresentation comes from Australian Anglican theologian, Michael L. Bird, who holds a PhD from the University of Queensland in my home city of Brisbane and teaches at Ridley Theological College in Melbourne. In his systematics text, Evangelical Theology (Zondervan, 2013; pictured),  after correctly describing the Lutheran doctrine as a reaction against the Roman Catholic doctrine of sacrifice, Bird also correctly notes that Lutherans still hold to a 'real presence' in the sacrament of the altar, a position which he says is called consubstantiation. No reference to the primary literature of the Lutheran Confessions is made to justify this terminology; in fact, if Dr. Bird had checked, he would have found the term is never used in them!


"...we hereby utterly condemn the Capernaitic eating of the body of Christ, as though [we taught that] His flesh were rent with the teeth, and digested like other food, which the Sacramentarians, against the testimony of their conscience, after all our frequent protests, wilfully force upon us, and in this way make our doctrine odious to their hearers; and on the other hand, we maintain and believe, according to the simple words of the testament of Christ, the true, yet supernatural eating of the body of Christ, as also the drinking of His blood, which human senses and reason do not comprehend, but as in all other articles of faith our reason is brought into captivity to the obedience of Christ, and this mystery is not apprehended otherwise than by faith alone, and revealed in the Word alone." [[Formula of Concord, Epitome, VII The Lord's Supper, Negative Theses]

The Lutheran doctrine is properly characterised not as 'consubstantiation', a philosophical doctrine which uses Aristotelian categories to teach a mixture of substances in the sacrament, but as a 'sacramental union' between the heavenly and earthly elements effected by our Lord's Word. The justification for this belief is not philosophy - unlike the Reformed, Lutherans do not use philosophy to authorise doctrine but merely as a handmaiden to theology - but Holy Scripture:


"We believe, teach, and confess that the body and blood of Christ are received with the bread and wine, not only spiritually by faith, but also orally; yet not in a Capernaitic, but in a supernatural, heavenly mode, because of the sacramental union; as the words of Christ clearly show, when Christ gives direction to take, eat, and drink, as was also done by the apostles; for it is written Mark 14:23: And they all drank of it. St. Paul likewise says, 1 Cor. 10:16: The bread which we break, is it not the communion of the body of Christ? that is: He who eats this bread eats the body of Christ, which also the chief ancient teachers of the Church, Chrysostom, Cyprian, Leo I, Gregory, Ambrose, Augustine, unanimously testify." [Formula of Concord, Epitome, VII The Lord's Supper, Affirmative Theses]

Disagree with the Lutheran teaching if you must, Reformed theologians, but please, if you write about it, at least take the trouble to represent it correctly.

Let ma also say that any theology which permits philosophy to be a guiding principle cannot be truly evangelical.
Posted by Acroamaticus at Friday, July 04, 2014 5 comments: