Is the Pope a Heretic? 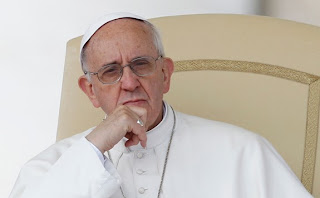 Is the Pope a heretic? Specifically, a Pelagian?

It's not for me to declare him a heretic, but reports like this of the Pope saying that atheists will be saved by living moral lives apart from faith in Christ or even belief in God, certainly raise the question: is the Pope, wittingly or unwittingly, a Pelagian?

The church condemned the Pelagian heresy at several councils, including Ephesus in 431 and most definitively at the Second Council of Orange in 529AD, thus preserving the Apostolic teaching that salvation is a gift that is received through faith in Jesus Christ, not a reward for good works:


But now apart from the law the righteousness of God has been made known, to which the Law and the Prophets testify. This righteousness is given through faith in Jesus Christ to all who believe. Paul's Letter to the Romans, 3:21 (NIV)

But Pelagian tendencies survived in monasticism and popular piety. Even today, many Roman Catholics, including higher clergy, are "practical Pelagians", according to American Roman Catholic catechist and author Sherry Weddell:


"I’d estimate that 95 – 98% of all the Catholics – including pastoral leaders – that I’ve ever worked with are functional universalists. Meaning that concerns regarding the personal salvation of anyone never cross their mind or affect their pastoral decisions and priorities. Roughly the same number are de facto Pelagians."


This rings true to me based on my experiences with Roman Catholics. So, I suppose in that context a pope with Pelagian leanings should not be that much of a surprise. Francis, alas, is not Benedict XVI, the German  scholar who by virtue of his origins at least had a first-hand familiarity with the doctrinal reforms proposed by Dr. Luther, which later became the doctrinal basis of the Lutheran Church once Luther was excommunicated by the Pope.

But whether he is a Pelagian or not (we suspect, even hope, that his theological minders are presently working overtime to ensure that he is not), the Pope appears to have fallen into another serious doctrinal error by declaring that it is a sin to go against conscience, effectively elevating conscience over divine revelation as a  religious authority. Dr. Luther famously took a stand for the rights of conscience in religious matters at the Diet of Worms when he said that it was neither right nor safe to go against conscience; but he had in mind a conscience enlightened and informed by revelation in Holy Scripture, natural law and sound reasoning:

"Unless convinced by the testimony of Scripture or right reason, for I trust neither the pope nor councils inasmuch as they have often erred and contradicted one another, I am bound by conscience, held captive by the Word of God in the Scriptures I have quoted. I neither can nor will recant anything, for it is neither right nor safe to act against conscience. God help me! Amen."

That is self-evidently not the case with atheists, who reject divine revelation and whose uninformed consciences and darkened reasoning therefore inevitably lead them in to sin, which is properly defined as transgression of God's Law, not transgression of conscience. It may be the case that Pope Francis, in his dialogue with atheists, was impelled by pastoral concerns (there's no doubting he has the heart of a pastor) ; but pastoral concern uninformed by sound doctrine is unlikely to guide anyone surely along the way that leads to eternal life.

Finally, we must note the irony involved in a Pope espousing a doctrine of the rights of conscience that is so open to religious subjectivism and unhinged from the catholic tradition. What a quandary this must place formerly Lutheran Roman Catholic bloggers in. After all, those are their usual complaints about Luther!

Email ThisBlogThis!Share to TwitterShare to FacebookShare to Pinterest
Labels: Luther, Papacy, Roman Catholicism, Why I Am Not Roman Catholic, Why the Reformation Is Not Over

Does This Family Look Like a Threat to the State?

Does the Wunderlich family (father Dirk and his four children pictured by mother Petra) look like a threat to the German state? Yet on Thursday of last week, armed German authorities (armed!) forcibly removed these four children from their home and parents. Why? Because the parents home school their children, something which Germany, which requires all children to attend state approved schools, outlaws. The origins of this law, we are not surprised to learn, go back to 1938 and Hitler's desire to have all German children under the tutelage of the state.  We can understand why Hitler would deny the calling of parents to educate their children, but what has contemporary, democratic, human rights respecting Germany to fear from upholding this calling in law as long as the educational needs of the children are seen to be met?


This case is emphatically not a matter of the children in question being neglected or even educationally deficient (the reality is probably the opposite, since studies repeatedly show that home schooled children outperform their school educated peers). It is an example of the brute enforcement of an unjust, totalitarian law behind which lies the un-Christian philosophical view that children "belong" to the state. How disappointing that this view could prevail in the land that gave us Luther.

The family in question did not provoke the authorities; they had tried to re-settle in neighbouring countries but economic necessity drove them back to their homeland. Incidentally, the Obama government is presently seeking to deport another German homeschooling family who sought refuge in the USA. One wonders if these families would be granted refugee status in Australia?

Whether one personally adopts the home education philosophy or not, the vocation and right of parents to determine the nature of their children's education is surely fundamental. The role of government is not to over-ride this vocation and  right, but to facilitate its proper exercise to the end that the educational needs of home schooled children are effectively met.

Dirk and Petra Wunderlich, the parents in question, plead for help - one can easily imagine their distress. You may wish to consider contacting the German embassy in your country to express your concern for them and their children and your disappointment at the German authorities' actions. Here are the Australian contact details:

It is estimated that there are 400 families in Germany who home school.