For What It's Worth

As a "man of the cloth" I venture tentatively onto the field of politics, although current events to do with Syria transcend politics and call for serious ethical reflection. Therefore, for what it's worth, I offer the fruits of my reflection here:

The so-called "Arab Spring" is a murky business which I believe Western countries are foolish to get involved in beyond extending our moral support to and offering our prayers for those sincerely seeking to overthrow tyranny (but not those seeking to replace one tyranny with another!). Let us also pray that our political leaders in Australia will be given the wisdom, foresight and independence of mind to keep us out of military intervention in Syria.

I note that overnight the British parliament refused to endorse British involvement in military intervention, which means that even some Conservatives must have voted against the wishes of PM David Cameron. Pace Senator Kerry's recent comments justifying military intervention, the actions of tyrants like Saddam Hussein, Gaddafi and Assad may indeed be deplorable, but humanitarian sentiment, however noble, is not a casus belli. The defence forces of democratic nations are just that - defence forces - they should not be used as blunt instruments of foreign policy.

I am not arguing for pacifism - indeed, I am proud of my family's tradition of military service - I am arguing that democratic nations should only resort to war for reasons that are both just and have to do with self-defence. Unless a tyrant represents a "clear and present danger" to a Western nation (e.g. as was the case with Hitler, at least after the invasion of France), we have, in my view, no moral or legal justification for military action against sovereign nations, no matter how much we may be revolted by events within them. Rather, in such cases, non-military measures - persuasion, material aid to the oppressed, boycott, freezing of international assets, UN police action, international law - should be pursued vigorously in the service of humanitarian need. That is difficult work - that is the arena for heroics; by comparison, the resort to war is too easy, it is, paradoxically, the moral coward's path. Furthermore, military action tends only to make matters worse in the short term for those we are ostensibly trying to help - because of the inevitability of "collateral damage" to human life even in "targeted" bombing, because of damage to civil infrastructure which only makes life more miserable for those on the ground and because of reprisals against the innocent by the oppressors.Western military intervention is very likely to only increase the violence of this conflict.

There are also wider geo-political considerations to ponder, likely possibilities which could impact upon the welfare of millions, even billions of humankind - in the case of Syria, Western intervention would almost certainly bring Iran into play, possibly leading to an attack on US ally Israel, which is armed with nuclear weapons. Not to mention the grim spectre of the involvement of Syria's ally, Russia. It may be a diabolical calculus, weighing up life against life, but we must ask: Is the potential human cost of intervention worth it? The Middle East is a tinder box; one spark could set it aflame and engulf the world in war. The retreat from diplomacy and the eagerness on the part of our political leaders  to seek a military solution are eerily reminiscent of events  99 years ago this month when the northern Indian summer of 1914 was terminated ominously by the thundering "guns of August". I have two great uncles, brothers, who were gassed in France in the course of that conflict and who subsequently died prematurely in their 40s - multiply their stories by the millions, especially the untold stories of the dead who forfeited their lives, and ask the question: Is it worth it? I put it to whoever reads this that it is not and we would do better to refrain from escalating the violence in this conflict.

In 1821 the sixth president of the United States - and one of its greatest - John Quincy Adams (who was also the son of the second president, John Adams, who was also great in that office), predicted that if the US began to get involved in foreign wars, even wars for democracy, it might gain an empire but in the process it would lose its soul. He said, famously, that America did not "go abroad in search of monsters to destroy." Perhaps someone in a position to do so should read this speech to President Obama:

"America, in the assembly of nations, since her admission among them, has invariably, though often fruitlessly, held forth to them the hand of honest friendship, of equal freedom, of generous reciprocity. She has uniformly spoken among them, though often to heedless and often to disdainful ears, the language of equal liberty, equal justice, and equal rights. She has, in the lapse of nearly half a century, without a single exception, respected the independence of other nations, while asserting and maintaining her own. She has abstained from interference in the concerns of others, even when the conflict has been for principles to which she clings, as to the last vital drop that visits the heart. She has seen that probably for centuries to come, all the contests of that Aceldama, the European World, will be contests between inveterate power, and emerging right. Wherever the standard of freedom and independence has been or shall be unfurled, there will her heart, her benedictions and her prayers be. But she goes not abroad in search of monsters to destroy. She is the well-wisher to the freedom and independence of all. She is the champion and vindicator only of her own. She will recommend the general cause, by the countenance of her voice, and the benignant sympathy of her example. She well knows that by once enlisting under other banners than her own, were they even the banners of foreign independence, she would involve herself, beyond the power of extrication, in all the wars of interest and intrigue, of individual avarice, envy, and ambition, which assume the colors and usurp the standard of freedom. The fundamental maxims of her policy would insensibly change from liberty to force. The frontlet upon her brows would no longer beam with the ineffable splendor of freedom and independence; but in its stead would soon be substituted an imperial diadem, flashing in false and tarnished lustre the murky radiance of dominion and power. She might become the dictatress of the world: she would be no longer the ruler of her own spirit." John Quincy Adams, from his Address to the American House of Representatives on 4th July, 1821.

The whole speech, in which, incidentally, Adams makes positive reference to Martin Luther and Gustavus Adolphus, can be found here.  Yes, it's long, but it is masterful oratory of the sort we just don't hear anymore. We tend to think of our own time as the most advanced in civilization's history, but the 19th century was an age in which the literate working and lower-middle classes (and in Britain, the US, Canada and Australia they were more literate than anywhere else and even more literate than the masses today) would eagerly gather in public halls for lectures on politics, history, theology and other weighty subjects. How many of the educated today would understand all of Adams's Biblical, Classical and historical references? Tragically, that enlightened Anglophone culture, deeply rooted in Christianity, died, along with many of its finest exponents, on the fields of France in WWI, since when Western culture - and its soul, the Christian church - has been in decline.  Perhaps that decline reflects God's judgement on a culture which so readily turned aside from its noblest, divinely taught beliefs and embraced organized, state-sanctioned violence as the means to resolve mere political disputes?

"We have grasped the mystery of the atom and rejected the Sermon on the Mount.... The world has achieved brilliance without wisdom, power without conscience. Ours is a world of nuclear giants and ethical infants; we know more about war than we do about peace, more about killing than we do about living."  General Omar Bradley, Commander of the US First Army, Normandy, 1944, from a speech made on the 11th November, 1948.
Posted by Acroamaticus at Friday, August 30, 2013 3 comments: 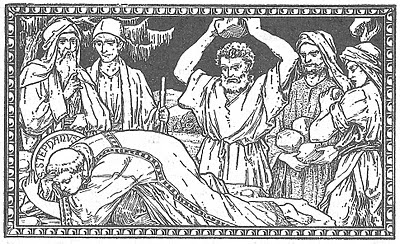 Pic: The Martyrdom of St Stephen
Posted by Acroamaticus at Tuesday, August 27, 2013 11 comments: