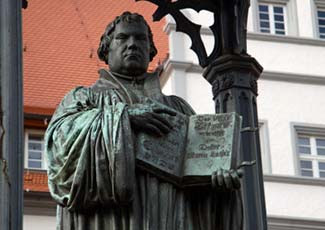 The Dutch Reformation scholar Heiko Oberman (1930-2001) once gave a guest lecture at a Lutheran seminary, after which he answered students' questions. He was asked to comment on Luther's understanding of inerrancy (the doctrine that Holy Scripture contains no formal errors). Oberman replied, "Do not import Reformed problems into Luther's thought!" If Oberman only meant to suggest that Luther was not preoccupied with the question of scripture's inerrancy in the way later theologians were we might grant his point, but I think he was implying something more. It was common among 20th century Luther scholars to project their own views onto Luther and to aver that he was not interested in a formal doctrine of scripture but only in scripture as the living Word of God. Certainly, we can say, Luther did emphasise the power of the preached Word and never wrote a formal treatise dealing with the attributes of scripture as God's written Word; he was, after all, pre-eminently a preacher and doctor (teacher) in Biblia and not a dogmatician. But to use these facts to parlay Luther into a sort of proto 20th C. neo-orthodox theologian (the neo-orthodox denied the inspiration and inerrancy of scripture while still attesting to its power - for them scripture becomes the Word of God only when we hear it as such) is a case of special pleading (i.e. ignoring counter-evidence). Luther's attitude to the question of scripture's inerrancy can be found thoughout his writings wherever he touches upon the subject either directly or in passing. Here are a few examples:


"It is impossible that Scripture should contradict itself; it only appears so to senseless and obstinate hypocrites WA, 9,356.


"Everyone knows that at times they [the fathers] have erred as men will; therefore, I am ready to trust them only when they prove their opinions from Scripture, which has never erred." WA. 7, 315: cf. WA. 15. 1481
"We see with what great diligence Moses, or rather the Holy Spirit, describes even the most insignificant acts and sufferings of the patriarchs." WA, 44, 91-92 (on Gen. 32:21-24).

"Who can think this through to his satisfaction? A man [Jonah] lives three days and three nights in solitude, without light, without food, in the midst of the sea, in a fish, and then comes back. I dare say that is what you would call a strange voyage. Indeed, who would believe it and not consider it a lie and a fable if it did not stand recorded in Scripture?" WA, 19, 219 (Exposition of Jonah) 1536fl

"He who carefully reads and studies the Scriptures will consider nothing so trifling that it does not at least contribute to the improvement of his life and morals, since the Holy Spirit wanted to have it committed to writing." WA. 42, 474 (on Gen. 12:11-13).


"The two incidents - that not a bone of the Lord Christ was broken and that His side was opened with a spear - do not appear to be of any particular significance. And yet, since the evangelist John adduces clear testimonies of Scripture, proving that Moses (Ex. 12:46) and Zechariah (12:10) predicted these things centuries before, we must confess that they are of great importance, no matter how insignificant the incidents seem to be; for the Holy Spirit does not speak anything to no purpose and in vain. " WA 4 52, 811 (on John 19:25-37).


"In the article of the [Nicene] Creed which treats of the Holy Spirit we say, ''Who spake by the prophets.' Thus we ascribe the entire Holy Scripture to the Holy Spirit." WA, 54, 35 (for Luther it was axiomatic that the Spirit could not err).


"The Holy Spirit is not a fool or a drunkard to express one point, not to say one word, in vain." WA, 40 III, 254 (on Ps. 127:3). WA, 54. 39 (discussion of Gen. 19:24 and I Chron. 17:10).
I've culled these quotes from John Warwick Montgomery's essay 'Lessons From Luther on the Inerrancy of Holy Writ'. Another valuable on-line resource readers might like to consult is J. M. Reu's 'Luther and the Scriptures'.
Modern scholars may not be able to believe in the inerrancy of scripture, but merely asserting that Luther shared their scepticism does not make it so. The theologians who, in the 17th century and later, explicated the teaching of Biblical inerrancy were closer to Luther than Oberman thought. 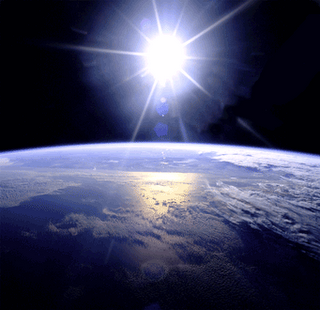 I still remember my high school science teacher telling our class about the Miller-Urey experiment that proved that life on earth could have originated naturally without supernatural causation. It was heady stuff for impressionable adolescent minds and helped to confirm a number of us in our incipient atheism. Ironically, around the same time that this was being taught to us, some rather large holes were being found in the basic premise of Miller and Urey. Indeed, it seems their experiment proved nothing at all in regard to the origin of life on earth:

"In 1953, a graduate student at the University of Chicago named Stanley Miller, along with his faculty advisor Harold Urey, performed experiments hoping to produce the building blocks of life under natural conditions on the early Earth. These "Miller-Urey experiments" intended to simulate lightning striking the gasses in the early Earth's atmosphere. After running the experiments and letting the chemical products sit for a period of time, Miller discovered that amino acids -- the building blocks of proteins -- had been produced.
For decades, these experiments have been hailed as a demonstration that the "building blocks" of life could have arisen under natural, realistic Earthlike conditions,corroborating the primordial soup hypothesis. However, it has also been known for decades that the Earth's early atmosphere was fundamentally different from the gasses used by Miller and Urey.
The atmosphere used in the Miller-Urey experiments was primarily composed of reducing gasses like methane, ammonia, and high levels of hydrogen. Geochemists now believe that the atmosphere of the early Earth did not contain appreciable amounts of these components. UC Santa Cruz origin-of-life theorist David Deamer explains in the journal Microbiology & Molecular Biology Reviews:


'This optimistic picture began to change in the late 1970s, when it became increasingly clear that the early atmosphere was probably volcanic in origin and composition, composed largely of carbon dioxide and nitrogen rather than the mixture of reducing gases assumed by the Miller-Urey model.'"

Seems you shouldn't believe everything your high school science teacher says! Personally, I worked that one out in my twenties when I read a number of books on the new physics and cosmology and discovered our science teacher's cosmology - the steady-state theory of the universe - had been challenged both theoretically and empirically for the best part of the 20th century. One of the most compelling arguments against naturalism I came across was in connection with Sir Fred Hoyle's theory that life was cast to earth by some extra-terrestrial intelligence. Having already become familiar with the then most recent mathematical calculations regarding the probabilility of intelligent life existing elsewhere in the universe, it seemed simpler to me to posit a super-natural creator, and from there I adopted a philosophical belief in the Christian God. Actual faith came somewhat later and is another story altogether. But enough of my thoughts... it seems the myth of the Miller-Urey exoeriemnt is a long time dying; for a short assesment of the top five problems with current naturalistic theories of the origins of life on earth, go here.
Posted by Acroamaticus at Friday, January 11, 2013 3 comments: