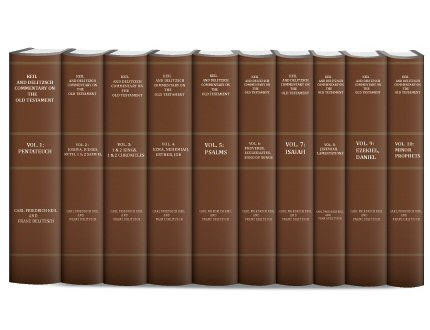 Happy to report that Keil and Delitzsch's monumental 19th Century commentary on the Old Testament - still in print in ET courtesy Hendrickson's of Massachusetts - is freely available on-line here. All commentaries should be used with caution, particularly by those who do not have facility with the original languages, but never the less they can be used with profit, especially this one by two relatively conservative Lutheran commentators of a previous era. Delitzsch's translation of the New Testament into Hebrew is still the leading example in its field, almost 150 years after its completion -testimony to the man's scholarship.

Posted by Acroamaticus at Tuesday, November 27, 2012 No comments:

"According to the Catechism of the Catholic Church (yes, Virginia, even Papists get it right sometimes! - ;0) MH), the requirement of proportionality in just war theory is that “the use of arms must not produce evils and disorders graver than the evil to be eliminated. By any reckoning, the current operation in Gaza has already done this, and the harm will be compounded if the Israeli government decides to launch a ground invasion. The fact that it is not yet as disproportionate as Operation Cast Lead or the second Lebanon war doesn’t make it all right."

It's a plea more than an analysis, but read it all here and pray for a speedy and just resolution to the present conflict that will end the slaughter of the innocents on both sides and pave the way for lasting peace and co-existence.
Posted by Acroamaticus at Tuesday, November 20, 2012 No comments:

Luther's Death in the Lord

"Luther's last words were apparently, "I thank Thee, Lord God, heavenly Father, that Thou hast revealed unto me Thy dear Son, in whom I believed, whom I confessed and preached, whom I loved and lauded but whom the godless dishonour, blaspheme and revile. I pray Thee, Lord Jesus Christ, let my soul be commended to Thee. O heavenly Father, I know, though I must give up this body, that I shall live forever with Thee. Deus dilexit mundum, ut filium suum unigenitum daret, ut omnis qui credit in eum„ non pereat, sed habeat vitam aeternam, Deus, qui salvos facis sperantes in Te et reducis ex morte (1). I am ready to depart." Then he said three times,"Pater, in manus tuas commendo' tibi spiritum meum. (2)" After this he was silent. When they shook him and called him, he did not answer. They then applied Aqua Vitae to his nostrils and called him loudly by name. Doctor Jonas and Michael (Coehus) asked him: "Doctor Martine, Reverende pater, are you now ready to die in the faith of Christ and the doctrine which you preached in His name?" Thereupon he said, so that it could be heard distinctly, "Yes." Then he turned on his right side and slept for some minutes, so that we hoped he was getting better. Then came the death-rattle, a deep drawn breath, and he was gone. Thus he departed peacefully and patiently in the Lord between two and three o'clock a.m."

From the Latin:
1) John 3:16, then 'O God, you save those who trust in you and bring them out of death.'
2) 'Father, into your hands I commend my spirit'
Posted by Acroamaticus at Wednesday, November 07, 2012 No comments:

Email ThisBlogThis!Share to TwitterShare to FacebookShare to Pinterest
Labels: Luther

End of the Fantasy of "Lutheran-Rite Romanism"?

Now the Spirit expressly says that in later times some will depart from the faith by devoting themselves to deceitful spirits and teachings of demons, through the insincerity of liars whose consciences are seared, who forbid marriage and require abstinence from foods that God created to be received with thanksgiving by those who believe and know the truth.  For everything created by God is good, and nothing is to be rejected if it is received with thanksgiving, for it is made holy by the word of God and prayer.
1 Timothy 4:1-4 (ESV Anglicised)

Over recent decades some catholic-minded Lutherans, especially the First Things & Lutheran Forum crowds, have openly speculated regarding the desirability and possibility of a sort of Lutheran-rite Romanism or Ordinariate, somewhat along the lines of recent offer made to Anglicans by the Pope. One of the sought after concessions, of course, would be married clergy. This might spell the end of that fantasy - according to a respected Roman canon lawyer, Rome absolutely requires "sexual continence" of married clergy in the Western church (Canon 277 excerpted below). Yes, you read that right, the  canon law of the Papacy requires that in the Western church even married priests and deacons abstain from sexual relations with their wives (in the Eastern Catholic Churches observance of this rule is a somewhat patchwork affair but the long-term trend has been towards celibacy; but since that is the Eastern church, where different rules apply, it does not immediately concern us here). This matter has apparently been the subject of much intra-Roman debate recently, particularly in light of the small but significant number of ex-Anglican married priests who have gone over to Rome, most recently in connection with the Anglican Ordinariate. Rome is expected to make a definitive ruling at some time in the future. Ex-Lutheran converts who have pledged their allegiance to the Papacy and aspire to the priesthood or diaconate will no doubt be hoping that ruling is in the distant, rather than the near future.  Lutheran pastors, meanwhile, will look with renewed appreciation upon the theological significance of the marriage of Martin and Katie.

Code of Canon Law, Canon 277:
§1 Clerics are obliged to observe perfect and perpetual continence for the sake of the Kingdom of heaven, and are therefore bound to celibacy. Celibacy is a special gift of God by which sacred ministers can more easily remain close to Christ with an undivided heart, and can dedicate themselves more freely to the service of God and their neighbour.

Posted by Acroamaticus at Monday, November 05, 2012 No comments:

Email ThisBlogThis!Share to TwitterShare to FacebookShare to Pinterest
Labels: Luther, Roman Catholicism, Why I Am Not Roman Catholic, Why the Reformation Is Not Over

According to the Annuario Pontificio, Clement of Rome (+ c. AD99) is the fourth Pope. Here is Clement teaching justification by faith apart from works:

"Let us unfold the tale of the ancient past. Why was our father Abraham blessed? Was it not because he acted in righteousness and truth, prompted by faith? Isaac, fully realizing what was going to happen, gladly let himself be led to sacrifice. In humility Jacob quit his homeland because of his brother. He went to Laban and became his slave, and to him there were given the twelve scepters of the tribes of Israel. And if anyone will candidly look into each example, he will realize the magnificence of the gifts God gives.

For from Jacob there came all the priests and the Levites who serve at God's altar. From him comes the Lord Jesus so far as his human nature goes. From him there come the kings and rulers and governors of Judah. Nor is the glory of the other tribes derived from him insignificant. For God promised that "your seed shall be as the stars of heaven." So all of them received honor and greatness, not through themselves or their own deeds or the right things they did, but through his will. And we, therefore, who by his will have been called in Jesus Christ, are not justified of ourselves or by our wisdom or insight or religious devotion or the holy deeds we have done from the heart, but by that faith by which almighty God has justified all men from the very beginning. To him be glory forever and ever. Amen." [italics mine]

Clement of Rome, Letter to the Corinthians (c. AD)
http://www.ccel.org/ccel/richardson/fathers.vi.i.iii.html

Compare this with the following Canons of the Council of Trent:

CANON 9: "If any one saith, that by faith alone the impious is justified; in such wise as to mean, that nothing else is required to co-operate in order to the obtaining the grace of Justification, and that it is not in any way necessary, that he be prepared and disposed by the movement of his own will; let him be anathema."

Canon 24: "If any one saith, that the justice received is not preserved and also increased before God through good works; but that the said works are merely the fruits and signs of Justification obtained, but not a cause of the increase thereof; let him be anathema."

To be sure, Clement's exposition lacks the polemical edge of Luther (naturally), but he clearly excludes acts of devotion or pious deeds from our justification, which for him is by a faith that has its source in God. There was indeed a lot of water under the bridge between Clement's time and the Council of Trent, but I suspect the assembled bishops gathered at Trent under the authority of the Pope would have been - along with Luther - loathe to admit that history relativizes doctrine, and their position is clear: faith alone is anathema and good works contribute to justification. Which presents our Roman Catholics with an interesting question: who was right, Clement or Trent?
Posted by Acroamaticus at Friday, November 02, 2012 4 comments:

Email ThisBlogThis!Share to TwitterShare to FacebookShare to Pinterest
Labels: Church Fathers, Justification, Lutheran Catholicity, Why I Am Not Roman Catholic

For Those Who Have Difficulty Navigating Luther's Works 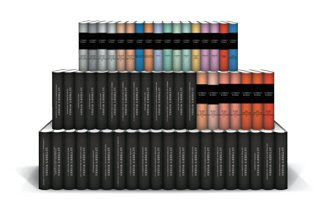 For those who have difficulty navigating Luther's Works...no, it's not the definitive and exhaustive subject and title index -  alas - but commiserations from the man himself:


by God’s grace a great many systematic books now exist, among which the Loci communes of Philip [Melanchthon] excel, with which a theologian and a bishop can be beautifully and abundantly prepared to be mighty in preaching the doctrine of piety, especially since the Holy Bible itself can now be had in nearly every language. But my books, as it happened, yes, as the lack of order in which the events transpired made it necessary, are accordingly crude and disordered chaos, which is now not easy to arrange even for me.

Posted by Acroamaticus at Thursday, November 01, 2012 No comments: