"It all began in the accursed seventh year of the papacy of Benedict XIV..." Just Another Vatican Scandal Pt II


"Between ourselves, these are two things that I have always observed to be in singular accord: supercelestial thoughts and subterranean conduct..."
Michel de Montaigne (1533-1592)

"At the Vatican, everyone is against everyone, and everyone feels they have God on their side."
Der Spiegel, 2012 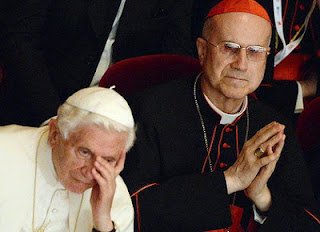 "It all began in the accursed seventh year of the papacy of Benedict XVI, with striking parallels to the latter part of Pope John Paul II's papacy. The same complaints about poor leadership and internal divisions are being aired outside the Vatican's walls, while the pope himself seems exhausted and no longer able to exert his power...
When compared with expectations, the results of Benedict XVI's seven years as pope have been rather modest. The German pope will not be remembered much for his avowed fight to preserve the unity of the Church. Instead, he will be remembered as a victim of circumstances and of fragmented, competing factions, as a pontiff plagued by scandals, mistakes and gaffes. He even built walls back up that seemed to have been worn down long ago. His papacy has consisted of years of ongoing apologies and alleged or actual misunderstandings."

Read it all here

Personally, it's difficult not to have some sympathy for Ratzinger, an intellectual and sometimes brilliant theologian thrust into the halls of power with great expectations that he would definitively reform the Roman church after decades of the ascent of liberalism and the rise of moral corruption to the surface. It was always going to be a tall order for the mild-mannered and devout German to outwit the Vatican insiders, who seem to take their inspiration more from Machiavelli than from the Gospels.
As this scandal increasingly plays out in the unforgiving light of media scrutiny, it might be said by some in defence of Rome that all churches suffer from sometimes vicious ecclesiastical politics. True enough, I suppose, but none seem to rise - or perhaps should that be sink -  to the levels of Rome; after all, how many church hierarchies today can, on their own authority, imprison an apparent whistleblower in a cell with only the barest of amenities without appeal to a judge unconnected with the prosecution (habeus corpus!)? Furthermore, most other church bodies do not claim that their hierarchies are the succcessors to the Apostles and the only guarantors of God's grace in this world. That claim would seem to require a higher degree of probity than that usually associated with the Roman curia.
It is premature to judge what the legacy of Ratzinger's papacy may be, but it does seem clear that he has not been the great reforming pope it was hoped he would be. Once again, it seems, the motto is proven true: Rome is semper eadem, always the same!

Put not your trust in princes,
in a son of man, in whom there is no salvation.
When his breath departs, he returns to the earth;
on that very day his plans perish.
Psalm 146:3-4

As usual, Mark, you appear to take delight in the failings of human beings within our Church, although I note that you acknowledge that problems like this exist in all Churches, even in the dear old LCA. The difference is simply one of scale - and the fact that the media gets far more enjoyment out of reporting our problems than they do out of yours!

At Penteocost, the priest in the parish I was visiting said at the end of mass that we will be hearing all about "corruption" in "the Church", by which we should understand the Vatican Heirarchy. But, he added, what we should all really be concerned about is the corruption in our own hearts, which is what we will be judged on. A sobering thought for us all.

In addition to which, contra Spiegel, what Pope Ratzinger will be remembered for in the long run is his teaching, which, after all is said and done and after he is dead and gone, is what will remain as a timeless, God-given grace to the Church.

No delight taken, I assure you David, as you ought to have construed from the sober tone of the post.
The reason for my acute interest is theological - how does the reality square with Rome's claims for itself? Holiness? Apostolicity? To borrow T.S. Eliot's line: "between the idea and the reality falls the shadow"; and in Rome's case the shadow seems particularly long and dark.

Mark, I think you have been a little loose in juxtaposing "decades of liberalism" and "the rise of moral corruption to the surface". I accept you think both should be reformed out of existence in the Roman Church. But I wonder whether in fact you have identified the correct targets.

First, if liberalism can be vernacularly defined as “anything goes”, then it’s probably incorrect to say it has invaded the church: indeed the complaint of traditionalists and rigorists of every shade has precisely been that there has been no room made for them at the inn under a determined modernist agenda and alternative paradigm. Modernism is not liberal.

Second, whether it is liberalism or modernism or even post-modernism that you would reform, it is not at all logical to make them cause to the effect of moral corruption. Indeed, as the principal complaint - namely, the self-protective response of the higher official ranks - about the sexual abuse scandal shows, it was a traditional, not a modern, ecclesial economy and its theological premisses that permitted the protection of clerical abusers. The roots of the modern scandals lie in the past. That we do not have even longer queues of victims and criminals before our courts is due in large part, I suggest, simply to the fact that most died in decades and centuries before churches and family homes were seen as fair game.

Third, the rise of modern corruption to the surface is hardly a bad thing, but long overdue. Infection held captive beneath festers and destroys. Boils must be lanced and poison released, if health is to be encouraged. Corruption can take many forms, not merely sexual, and arguably triumphalist tendencies foster even more insidious ones.

I don’t protest your personal sympathies for reform, but I think you could be more accurate or judicious in your targets.

"Modernism is not liberal."
Good point, Stephen, and a truth long noted in Lutheran circles as well. I might edit the post accordingly.

"it is not at all logical to make them cause to the effect of moral corruption."
Yes, I agree; my juxtaposition of liberalism/modernism and moral corruption did not imply causality but co-existence. In fact, the modernist/liberal desire for the abolition of clerical celibacy would surely go a long way to changing the culture which has bred the moral corruption.

They taught themselves to think that one man can control the whole Church and dictate infallibly what the Truth is... so, as a logical consequence, all men want to be that man, so that they can get the chance to mold and shape the Truth and the Church into their own image and likeness... this is how their incorrect dogma disastrously affected their mentality. But truth is always the same, eternal and everlasting, not made by man's hand. It is uncreated, it can only be known and accepted, delivered and transmitted, never created, changed, or altered; re-shaped and re-fashioned.

To "interpret", or to "re-interpret": THIS is the question!