A correspondent suggested I was indulging in ecclesiastical schadenfreude (joy in another's misfortune) in my post on the current Vatican scandal. I thought my tone and comments in that post were sober enough to  deflect such a charge, but evidently not. So, just to clarify - to delight in the current ills besetting the Vatican would be un-Christian. Why, even Aristotle noted in his Ethics that there is a malevolence in taking pleasure in another's misfortune which is incompatible with the justice we should strive for in all our relations with others. If even a pagan can come to such a realization, than the Christian has no excuse to indulge in such sentiments. 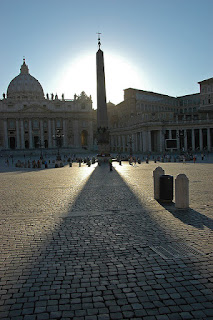 As I remarked to David in response, my acute interest in the Vatican leaks scandal is moral and theological and not evil-minded. An institution which claims to be the guarantor of God's grace in the world and, I might add, an infallible guide in matters of faith and morals, surely invites scrutiny as to its own moral life? Is it not reasonable to expect only  the highest degree of probity from men who claim to be the leaders of the "one, holy, catholic and apostolic church" and, by divine right, the successors to the Holy Apostles? To scrutinize or test the actions of such men against the very standards they inculcate in others is the duty of a Christian, since one must firmly decide for or against such momentous claims and it is, as our Lord said, "by their fruits that ye shall know them". When I thus consider the Vatican, T. S. Eliot's line from 'The Hollow Men' comes into my mind: Between the idea and the reality...falls the shadow. In the case of Rome the shadow seems conspicuously long.

Having said this in my defence, though, I will happily confess to using the various scandals of the Vatican as an antidote to the romantic longings for a return to Rome which seem to afflict some Lutheran pastors and laity in these poor and difficult times for the church of the Augsburg Confession. Whenever such a longing arises in my own heart and my head goes dizzy with thoughts of incense and Latin chanting, and the ancient Tempter approaches pointing to the Joint Declaration on the Doctrine of Justification in his hand, one whiff of  pungent "Vatican Salts" is all it takes to regain my Lutheran consciousness!

Email ThisBlogThis!Share to TwitterShare to FacebookShare to Pinterest
Labels: Ethics, Roman Catholicism, Why I Am Not Roman Catholic

I still don't think you have quite understood my point, Mark.

Your criticism is based on what appears to be a disjunction between the Catholic Church's claim to be the "the guarantor of God's grace in the world and, I might add, an infallible guide in matters of faith and morals" and the way some of her members, even among her leaders, are behaving.

You are giving a lot of credance to rumour rather than fact here - we do not know (and probably even the pope doesn't know) exactly what is going on - we have rumours and strange things being reported in the papers, but no one has actually been charged with any crimes here except for a butler (which sounds like the stuff of Agatha Christie, but is hardly the basis for condemning the whole Catholic Church) - what you are seeing is exactly the same sort of thing that goes on in any human institution, including other Christian communities. It goes on because the members of these institutions - even good and holy Christian institutions - are still sinners. That is no different in the Catholic Church to what it is in the LCA or any other Christian communion.

The Church's claim to be an (not the only) instrument of God's Grace and integral to the plan of God for the salvation of the world, doesn't change this one bit, and it is a bit Donatist of you to think that it would. While the example of the saints in the Catholic Church is a strong factor in the attraction of converts to the Church, I don't know of any Protestant who has converted to the Catholic faith because they believed that the institution of the Catholic Church (rather than the Church in her spiritual aspect) is "more holy" than the institutions of any other Christian communion.

While the Church's claim to be a infallible teacher of faith and morals is certainly not helped when the faith and morals of her members (and even her leaders) does not comply with that teaching, it is not proof that the claim is false. It is, and always will be, the beauty and holiness of Truth that attracts converts to the Catholic faith, not some fanciful idea that the institutions and members of our church possess a greater degree of holiness and purity than the insititutions and members of other Christian communities.

Thanks for your reponse, David.
Perhaps we are talking past each other. I'm presently wrapping up a busy week but I'll be on recreation leave as of Friday so perhaps I can respond then.

One question in the meantime - are you saying that the marks of the church as claimed by Rome are simply objects of faith and not actualised in its life? Of course, the marks are objects of faith, but it has always seemed to me that the distinguishing feature of Rome is the claim that the marks are demonstrably evident in itself as in no other church body (or ecclesial community!). Is not the Roman church "where the Spirit flourishes", even "the temple of the Spirit" where His gifts are poured out for the purpose of making the church holy? Is it not from the Roman church itself, the divine-human institution presided over by the Pope and the magisterium and administered by the curia, which claims to provide the baptized with the "example of holiness"? This is all taken from the CCC, btw. I'm simply saying that we should be able to assay (quantitatively examine) these momentous claims in the life of the church itself. If not, then the Roman conception of the church would seem to be more of a Platonic Idea than a reality in time and space.

One English catholic Priest on his Blog said that he would never go to the Vatican as he was PBI (poor b----y infantry) and he would end up punching a Vatican bureaucrat in the mouth. Pity he does not go and cleans out those who are Machiavellian and not acting as Christians.

Better not, Matthias.
I'm fairly certain that a priest striking another priest is grounds for dismissal from holy orders under canon law. He'd end up in the cell next to the butler (I believe there are three!).

But he would be able to hear the butler's confessions

Sorry to read at the end of the article that even the Lutherans in Australia are going through "poor and difficult times." Such is the case here in the States also. For over a year, I have been thinking of "swimming the Tiber" so I might be loyal to the Confessions as such seems to be impossible here. "They are just historical documents," my dean advised me at a clergy gathering.I am not sure which would be worse - scandals in the Church or "anything goes as long as it's new and exciting" as I currently have. Either way, I have to bury my head in the sand to survive. If the founders of my seminary, Krauth and the like who fought against "Americanization" by the General Synod, could see their beloved Lutheran church now, they'd weep bitterly.

Hi Derk, or "G'day" (Good Day) as we customarily say "down under". Welcome to the old manse!
I empathise with your situation. Unlike the ELCA, the LCA (Lutheran Church of Australia) is not troubled so much by Liberalism as by a drift away from confessional theology towards evangelicalism and church growth. At least in the US you have some alternative Lutheran synodical bodies to consider. Swimming the Tiber to preserve Lutheran confessionalism seems a "bridge too far" for me, as one would have to give up original sin and justification.