Would you believe that by day this amazing guitarist is a Belgian shopkeeper? No kidding! That's a long way from the Mississippi Delta, both geographically and culturally. But he certainly has the chops [that's musician's slang for technical aptitude, in case you didn't know ;0)]. If you are an aspiring guitarist and have the passion and patience (not to mention the time for practice) to develop the requisite skills you can learn to play it via his freely available on-line lessons complete with tabs - follow the link here. Or if you just love country blues you might want to buy his CD. I love the way this bloke plays; technically good blues guitarists are a dime a dozen these days, but "daddystovepipe" also has the blues feeling. Bless him!
Posted by Acroamaticus at Tuesday, February 28, 2012 2 comments:

Email ThisBlogThis!Share to TwitterShare to FacebookShare to Pinterest
Labels: Music

If you could ask Richard Dawkins one question... 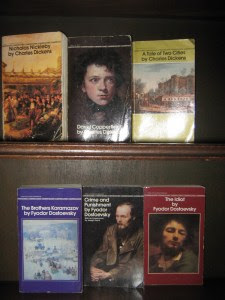 Nothing wrong with good works, of course, and we should not gainsay the role of Dickens's novels in forming the collective conscience of middle-class England in the 19th century. And, as the quotation above from Oliver Twist shows us, Dickens was rightly sensitive of and concerned for the religious education of the great, wretchedly poor and ignorant masses of the English working class whom even Methodism had failed to reach entirely (who provided the human raw material, so to speak, for colonial Australian society, but that's another story. One of only two statues of Dickens can be found in Sydney). But what sort of religious education would Dickens, who once dabbled in Unitarianism, have liked to see Oliver acquire? One is inclined to think it would have been more along the lines of Tolstoy's (another Dickens admirer) rationalistic religion of good works than Dostoevsky's mysterious, Christ-focused religion of redemption. In the final analysis it was not the redemption of the soul as much as the redemption of the social value of a life that Dickens was obsessed by. He might have benefited from the counsel Dostoevsky gave to one of his friends in a letter: "Wouldn’t it be more to the point…if you read somewhat more attentively the epistles of St. Paul?"
Posted by Acroamaticus at Tuesday, February 07, 2012 2 comments:

A Prodigal Returns Home: From Megadeth Bassist to Lutheran Seminarian 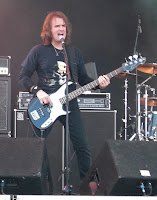 "CLAYTON, Mo. – As new students wandered onto the campus of Concordia Seminary (St Louis - MH) last September, they were joined by another group of theological rookies — mostly midcareer types — joining the school's program that allows students to train for the ministry online.

As the consultants, electricians, farmers and entrepreneurs in the Specific Ministry Pastor Program met up before reconnecting online from hundreds or thousands of miles away in the coming weeks, one student's story truly rocked.

David Ellefson was an honest-to-God founding member of the legendary thrash metal band Megadeth...by the time Ellefson was 25, the rock star lifestyle had caught up to him. In a 12-step recovery program, he was reintroduced to his faith and embraced it. He moved to Arizona, married and had children. He eventually landed at Shepherd of the Desert Lutheran Church, a Lutheran Church-Missouri Synod congregation in Scottsdale.

"I came from a good family, not a broken home," said Ellefson, 47. "That became a model for me, and I saw church at (the) center of it." Courtesy Religion News Service. Read the whole thing here.

Just for the record, I have no idea who Megadeth were/are (I spent the '80s listening to Beatles and Byrds albums, and these days the "heaviest" music on my turntable is probably Bach's fugues), but nevertheless I found this story interesting, not least because Ellefson's story will give many of the older generation hope that their wayward adult children might return to practicing the faith one day (another post on that topic coming up).

Chrysostom: The Just Shall Live By Faith

"For all have sinned, and are under the curse. However he does not say this yet, lest he should seem to lay it down of himself, but here again establishes his point by a text which concisely states both points; that no man has fulfilled the Law, (wherefore they are under the curse,) and, that Faith justifies. What then is the text? It is in the book of the prophet Habakkuk, "The just shall live by faith," (Hab. ii: 4) which not only establishes the righteousness that is of Faith, but also that there is no salvation through the Law. As no one, he says, kept the Law, but all were under the curse, on account of transgression, an easy way was provided, that from Faith, which is in itself a strong proof that no man can be justified by the Law. For the prophet says not, "The just shall live by the Law," but, "by faith".

Chrysostom on Righteousness as a Gift by Faith, Not Works

"And he well said, "a righteousness of mine own," not that which I gained by labor and toil, but that which I found from grace. If then he who was so excellent is saved by grace, much more are you. For since it was likely they would say that the righteousness which comes from toil is the greater, he shows that it is dung in comparison with the other. For otherwise I, who was so excellent in it, would not have cast it away, and run to the other. But what is that other? That which is from the faith of God, i.e. it too is given by God. This is the righteousness of God; this is altogether a gift. And the gifts of God far exceed those worthless good deeds, which are due to our own diligence."

Chrysostom does not always get his exposition of the Word of God right (cf. Walther's comments in Law & Gospel, ch 7), but when he does get it right, as here, imo he exceeds all the other Fathers in the clarity of his preaching of the Gospel.

It is salutary to contemplate what might have been if Chrysostom's grasp of the meaning of the righteousness of God had survived through the Middle Ages. As it was, scholasticism distorted the meaning of the term to mean the retributive righteousness of God by which he condemns and punishes sinners. Thus when Luther, meditating on Romans 1:17 in his monastic cell at Wittenberg, was led to realize that "the righteousness of God" was a gift that came through faith, it was as though the Gospel had been rediscovered and the gates of Heaven opened, as he himself tells us: "I was altogether born again and had entered paradise itself through open gates . . . that place in Paul was for me truly the gate to paradise."
Posted by Acroamaticus at Wednesday, February 01, 2012 9 comments: