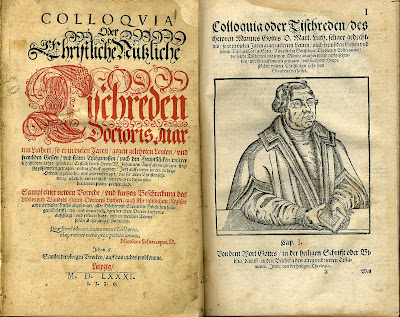 Recently Dr. John Kleinig, a lecturer at my alma mater, Luther Seminary, Adelaide, South Australia (or Australian Lutheran College as it is now more prosaically known) sent out a request for help in tracking down a well-known quote attributed to Luther. Here is the quote as it is referred to in an essay by Robert D. Prues, 'Word, Doctrine and Confession' (in Doctrine is Life, Essays on Scripture, Concordia 2006, p285-286):

If I profess, with the loudest voice and the clearest exposition, every portion of the truth of God except precisely that little point which the world and the devil are at that moment attacking, I am not confessing Christ, however boldly I may be professing Christianity. Where the battle rages the loyalty of the soldier is proved; and to be steady on all the battle-field besides is mere flight and disgrace to him if he flinches at that one point.


I had heard the quote before, often given off the cuff by students in the refectory during a heated argument over morning tea and occasionally it was even cited by lecturers in the lecture room, and I suspect it is known at least in paraphrased form by most consciously confessional Lutherans; it is particularly relevant to our times and is therefore probably one of the three or four best-known quotations from Luther bandied about in confessional circles today. That and the fact that I love research meant that I couldn't resist following this request up.

The quote sounds like it might come from Luther's Table-Talk, but I'm sure better scholars than I have searched the Tischreden in vain for the citation. For example, I can't believe that a careful a scholar like Robert Preus did not spend quite a bit of time searching for the quote in the huge leather-bound volumes of the Weimarer Ausgabe von Luthers Werke before giving up and reluctantly referencing the citation thus in footnote #85 of the above cited essay that otherwise bristles with a familiarity with the original sources:'These sentences are quoted from Francis A. Schaeffer, "Truth Versus the New Humanism and the New Theology," in Erich Kiehl and Waldo Werning, eds., Evangelical Directions for the Lutheran Church , 1970, 21'.

So, where did Francis Shaeffer get the quote from? That I cannot say with certainty, since he did not reference it. But, I believe I have tracked down the first occurrence of the words in print, thanks to the wonders of the internet that allow an amateur scholar to access some of the world's best libraries without ever leaving his study in an old country manse (with an iffy internet connection at best!) . 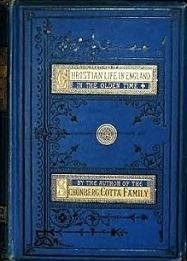 Elizabeth Charles was a 19th century English novelist and hymn translator, who was once commissioned to write a historical novel set in Reformation times; the novel appeared in 1862 with the title Chronicles of the Schoenberg-Cotta Family and became a best-seller, being translated into several European and other languages -even Hindi! (the fact of the novel's popularity immediately reminds us of the deep religiosity of the second-half of the 19th century, which is perhaps comparable only in magnitude to the credulity of the second-half of the 20th century).

Charles' novel records the impact of the Reformation through the eyes of several members of the fictional Schoenberg-Cotta family. In chapter XIX, titled 'Fritz's Story' (p. 276 in the 1864 Thomas Nelson edition), you will find the following entry in the fictional diary of one Fritz, a sometime Augustinian monk converted to the Reformation cause by Luther (ellipses indicate editing on my part for the sake of brevity):

A chasm has opened between me and my monastic life. I have been in the prison, and in the prison have I received at last, in full, my emancipation. The ties I dreaded impatiently to break have been broken for me, and I am a monk no longer...

But the time came when Dr. Luther's name was on every lip. The bull of excommunication went forth against him from the Vatican. His name was branded as that of the vilest of heretics by every adherent of the Pope. In many churches, especially those of the Dominicans, the people were summoned by the great bells to a solemn service of anathema, where the whole of the priests, gathered at the altar in the darkened building, pronounced the terrible words of doom, and then, flinging down their blazing torches extinguished them on the stone pavement, as hope, they said, was extinguished by the anathema for the soul of the accursed.

...mine was not the only heart which glowed with burning indignation to hear that worthy name linked with those of apostates and heretics, and held up to universal execration. But, perhaps, in no heart there did it enkindle such a fire as in mine. Because I knew the source from which those curses came, how lightly, how carelessly those firebrands were flung; not fiercely, by the fanaticism of blinded consciences, but daintily and deliberately, by cruel, reckless hands, as a matter of diplomacy and policy, by those who cared themselves neither for God's curse nor his blessing. And I knew also the heart which they were meant to wound; how loyal, how tender, how true; how slowly, and with what pain Dr. Luther had learned to believe the idols of his youth a lie; with what a wrench, when the choice at last had to be made between the word of God and the voice of the Church, he had clung to the Bible, and let the hopes, and trust, and friendships of earlier days be torn from him; what anguish that separation still cost him; how willingly, as a humble little child, at the sacrifice of anything but truth and human souls, he would have flung himself again on the bosom of that Church to which, in his fervent youth, he had offered up all that makes life dear...

After the publication of the excommunication, they publicly burned the writings of Dr. Luther in the great square. Mainz was the first city in Germany where this indignity was offered him.

Mournfully I returned to my convent. In the cloisters of our Order the opinions concerning Luther are much divided. The writings of St. Augustine have kept the truth alive in many hearts amongst us; and besides this, there is the natural bias to one of our own order, and the party opposition to the Dominicans, Tetzel and Eck, Dr. Luther's enemies. Probably there are few Augustinian convents in which there are not two opposite parties in reference to Dr. Luther.

In speaking of the great truths, of God freely justifying the sinner because Christ died, (the Judge acquitting because the Judge himself had suffered for the guilty), I had endeavoured to trace them, as I have said, beyond all human words to their divine authority. But now to confess Luther seemed to me to have become identical with confessing Christ . It is the truth which is assailed in any age which tests our fidelity. It is to confess we are called, not merely to profess. If I profess, with the loudest voice and the clearest exposition, every portion of the truth of God except precisely that little point which the world and the devil are at that moment attacking, I am not confessing Christ, however boldly I may be professing Christianity. Where the battle rages the loyalty of the soldier is proved; and to be steady on all the battle-field besides is mere flight and disgrace to him if he flinches at that one point."

So, the mystery of the source of the famous Luther quote is solved. It is not Luther at all, but Elizabeth Charles, or so it would seem, unless someone, somewhere can turn up an original citation from Luther's works.

Finally, there is a delightful little twist in this tale too: Elizabeth Charles was the daughter of John Rundle, sometime Member of Parliament in the British House of Commons for the electorate of Tavistock in Devon. He was also a founder of the South Australia Company, which fostered much of the settlement and trade of the South Australian colony. The main street of Adelaide, the city from whence the original call for help came from Dr Kleinig at Luther Seminary, is named after him, "Rundle Mall". 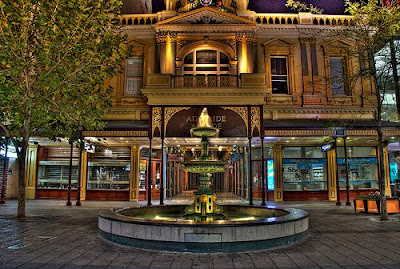 (Pics: Top: Title Page, Luther's Tischreden or Table Talk; Middle: A popular level volume on English church history by Elizabeth Charles which advertises itself as by the author of the best-selling Chronicles of the Schoenberg-Cotta Family;
Bottom: Rundle Mall Fountain and the Adelaide Arcade at night)
Posted by Acroamaticus at Monday, November 30, 2009

Fascinating stuff. Thanks for the history lesson.

I cannot wait to spring this on someone the next time Luther is quoted with that famous non-Luther quote!