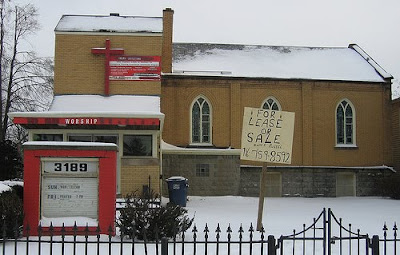 An article in The Times On-line edition today (click on post title to read it) states that the Church of England will lose a tenth of its clergy in the next five years (stipendiary clergy that is, the ones who get paid, as opposed to non-stipendiary, volunteer clergy who hold other jobs but also conduct services on a Sunday, of whom there are quite a number in the C of E) largely due to financial pressures caused by the GFC (although a clergy shortage also seems to be contributing to the impending disaster) which means that basically the C of E cannot afford to pay for every parish to have an incumbent pastor. Instead of being assigned to a parish, ministers will instead serve clusters of parishes in the near future.

To the average C of E worshipper used to having their own vicar in the parish, that news is no doubt quite disturbing. But frankly, what I would find more frightening if I were a Church of England member are the following projections buried further down in the article about attendance and the extent to which the Church of England will be representative of England's population in the future (or not, as the case may be):

"About one in sixty people worships with the Church of England on an average Sunday. This is projected to drop to less than one in 600 by 2050. The average age of a British Anglican worshipper was 37 in 1980, but is expected to rise to 67 by 2050."

Of course, this is all "if present trends continue...". Churches have been written off before and have subsequently experienced unforeseen renewal, for where God is involved things unforeseen by humans frequently happen! But churches have disappeared too (try to find the seven churches mentioned in the Revelation to John the Divine today), and peoples have ceased to be Christian, and it is entirely possible that - if present trends continue - not only could the Church of England cease to exist, but the English themselves could cease to be a Christian people before the end of the century, or even within my lifetime if the process of decline accelerates.

When thinking of the possible reasons for this decline, I think in terms of circles within circles, all squeezing the life out of the church - the inner circles are matters particular to the Church of England and its history and character, but the outer circles are religious and cultural forces that are operative on all church bodies in Western societies to a greater or lesser extent. I may post further on these matters in the near future - in the meantime, you're cordially invited to put your 2 pence worth in via the comments box.

PS
Quite by co-incidence, Bill Muhlenberg over at Culture Watch uses the same phrase, "if present trends continue" relating to the receding Christian faith in Australia on his current post on the Prayer Breakfast held annually at Australia's Parliament House:http://www.billmuehlenberg.com/2009/11/27/pray-for-the-prayer-breakfast/ or click on the link under the heading 'Other Blogs...' in the righ-hand links column.

PPS
Meanwhile, a 2008 Pew Forum on Religion and Public Life survey of 35 000 Americans detected an almost 10% fall in those identifying as Christian as compared with 1986 figures.
A big loser was the Roman Catholic church, but mainline Episcopalians (i.e. Anglicans) and Lutherans (i.e. ELCA) are also experiencing significant and accelerating decline. Conservative or evangelical churches appear to be somewhat resistant to the decline, for now.
See here: http://www.digitaljournal.com/article/268957
Posted by Acroamaticus at Saturday, November 28, 2009

Email ThisBlogThis!Share to TwitterShare to FacebookShare to Pinterest
Labels: Anglicanism, Church and Society, Church of England