On the Truthfulness of Church Councils 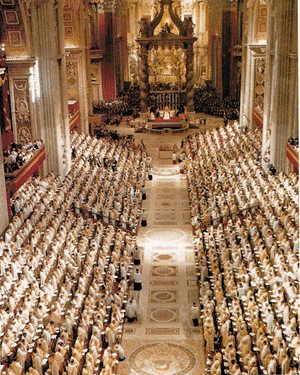 It is not "ecumenicity" but the truthfulness of (ecumenical) councils that makes their decisions binding on us. Here we touch on the basic mystery of the Orthodox doctrine on the Church: The Church is the miracle of God's presence among mankind already without any formally defined "criterion" or "infallibility". It is not enough just to convene an ecumenical council to proclaim the truth (whatever the historical reality may be that is attached to the idea of the council); what matters is that among those assembled there should be present He who said: "I am the way, and the truth and the life." Without this presence the assembly, however numerous and representative it may be, is not in the truth...In the course of history, ecumenical councils have merely been the means of proclaiming the truth.

John Meyendorff
from a Russian language article in Vestnik, No. 1, (1959)
(Vestnik = 'The Messenger', journal of the Russian Orthodox Archdiocese of Paris and Western Europe, Ecumenical Patriarchate)

Comment: Meyendorff goes on to criticise what he regards as Rome's objectivising of God's presence in the church through an infallible Pope - and likewise, but less convincingly in my opinion, Protestantism's objectivising of his presence in an infallible scripture. However, I think an Evangelical Lutheran could agree with the basic thrust of his argument here - the fact that a council is deemed "ecumenical" by the fact of who is and how many are in attendance does not guarantee the truth of its proclamations. That is only vouchsafed by the presence of Christ in and with the assembly, and how else are we to know whether that is the case but by testing the council's proclamations against the canon of God's word written, to which Christ Himself has given His imprimatur?
Posted by Acroamaticus at Wednesday, April 29, 2009 No comments: 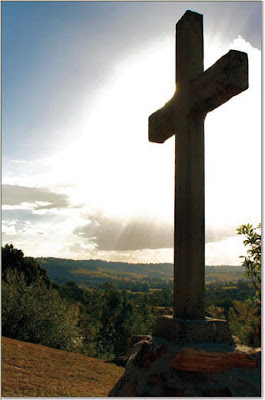 Make no mistake: If He rose at all
it was as His body...
Let us not mock God with metaphor
analogy, sidestepping, transcendence;
making of the event a parable,
a sign painted in the faded credulity of earlier ages:
let us walk through the door.

(Yes, I posted the same thing last year, but it deserves repeating!)
Posted by Acroamaticus at Monday, April 13, 2009 No comments: 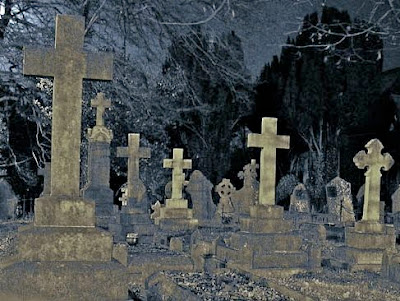 The women saw how his body was laid; and they prepared spices and ointments; and rested the sabbath day according to the commandment (Luke 23:55,56).

Reflections on Holy Saturday Near to its Doctrinal Themes.

Historically and biblically the Burial Office is primarily about the Gospel of Jesus Christ and secondarily about the person who has died because God is the God of the living and the dead. The proclamation is of the Christian hope of the resurrection of the dead and of life everlasting in the perfect Kingdom of God. And the deceased is commended within that living hope. Often a memorial service relating to the buried deceased is held days or weeks after the funeral burial service.

What are the chief features of the Christian Burial Office in the classic Anglican Prayer Books up to the modern era?

1. At the service there is always the body of the deceased unless he has been lost at sea. There can be no burial office without a body. (Today at funeral services such is very uncommon. The presence of a body or cremated remains are very rare, and are usually found in the funeral director’s establishment.)

3. The natural expression of the mourners is that of the Psalms which were the prayers of Jesus, and these can be said or sung before and after the burial office. (In contrast in modern funerals any preferred music may be used.)

5. Also integral to the Christian Burial Office is the Collect which, though longish, sets out the Christian hope with power and clarity.( In contrast, modern Christian funeral substitutes Collects of choice.)

6. Absolutely integral to the Christian Burial Office is the final Commendation where the recognition of the separation of soul and body is acknowledged and both are commended to the care of God until they are reunited as one in the great Resurrection of the Last Day: when all diseases and sicknesses and maladies shall be eliminated everlastingly. (In contrast, for many modern funerals the celebration of the person in this life and this only is in view.)

7. In the Burial Office the service at the graveside must end with the anthem: I heard a voice from heaven, saying unto me, Write, From henceforth blessed are the dead which die in the Lord: even so saith the Spirit; for they rest from their labours.

Comment: Although these comments have regard to the place of the Burial Office of the Prayer Book tradition in contemporary Anglicanism, I have posted them due to their relevance for Lutheran funeral practices and also to acknowledge Dr Toon's death on Saturday 25th April and his contribution to orthodox Anglicanism and the wider Christendom. As well as valuing his efforts to promote basic creedal orthodoxy in the Church of England, the Episcopalian Church and the Anglican Communion generally, I particularly appreciate Dr Toon's early work on English evangelicalism and the Oxford Movement.

Let light perpetual shine upon him.
(Original post of 11th April updated)
Posted by Acroamaticus at Saturday, April 11, 2009 No comments:

I've decided to change the title of the blog from the obscure 'Acroamaticus' to the plain 'Evangelical Lutheran', to better reflect the new direction I'm taking.
Posted by Acroamaticus at Saturday, April 11, 2009 No comments: 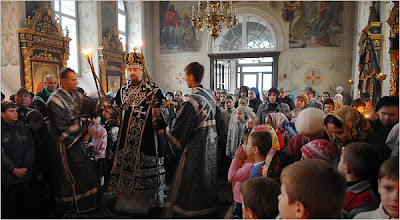 "...contemporary Orthodoxy possesses the gospel in a formal way but we are not translating it in a relevant, life-changing way. The clarity of the gospel is not intentionally made central to our liturgical services and everyday lives. Formally, in its liturgy, sacraments, iconography, hymnography, spirituality, and theological literature, the Orthodox Church is extremely Christ-centered; in practice, however, it is not. Just because the gospel is formally in the life of the Church does not mean that Orthodox parishioners have understood and appropriated its message! Our bishops and priests need to make the gospel crystal clear and absolutely central in our parishes.

This is not to say sermons are not preached. They are, and are often eloquent. But very often what priests preach are not the life, death, and resurrection of Jesus and His call to total commitment and what that means to everyday life and liturgy. Our leaders wrongly assume everybody knows about that subject. Instead of Christ-centered messages, we hear sermons dealing with moral values, social issues, financial giving, the environment, or the need for more Church attendance -all inseparably related to the gospel, but not to be confused with the Good News itself. In effect, the authentic gospel is replaced with a social gospel or a liturgical gospel (as if simply "going to Church" is all that is needed). I often wonder, "Are our people really evangelized, or are they simply sacramentalized?"

Comment: This brings to mind something Dr Sasse said, "the sacrament without the Word leads to idolatry". I can't recall where he wrote this, or if it was one of his aphorisms someone repeated in my seminary days. This is not to suggest it applies only to Orthodoxy either; formalism is surely a danger for each of the sacramental churches. While Lutheran doctrine correctly preserves the objective nature of the sacraments, is there a danger that we do not equally preach faith as necessary for a beneficial reception of them?
Posted by Acroamaticus at Tuesday, April 07, 2009 No comments: