"Man's Sensitivity to trivia, and his insensitivity to matters of major importance, reveal he has a strange disorder."
Blaise Pascal (+1662)

Comment: The truth of this statement is reinforced time and again in a pastor's ministry.
Posted by Acroamaticus at Wednesday, March 18, 2009 No comments:

I've decided to alter the nature of my blog. Time does not permit me to spend much time blogging at present (probably a good thing). Therefore, rather than occasional longer reflections, I will now use the blog to record gleanings from my reading with occasional notes, an e-journal if you like. This will help me to keep track of insights I have found helpful and I hope it will also be of value to regular readers. Posts will therefore be shorter but, I hope, more frequent. I may also include exegetical and homiletical reflections on the lectionary texts and record attempts to untie exegetical knots.
I've done some housekeeping too - you'll notice a new template, still minimalistic but hopefully more friendly, and some posts that were not in keeping with my new goals for this blog have been deleted. I would also review the labels and categories if I could work out how to do that short of deleting them entirely, and I hope to have some useful links up and running soon.

Thanks for sticking with me, dear readers!
Oh, and comments are now enabled.
Posted by Acroamaticus at Tuesday, March 17, 2009

Anyone who wishes to be saved must know that all his sins have been placed on the back of this Lamb! Therefore John points this Lamb out to his disciples, saying: “Do you want to know where the sins of the world are placed for forgiveness? Then don’t resort to the Law of Moses or betake yourselves to the devil; there, to be sure, you will find sins, but sins to terrify you and damn you. But if you really want to find a place where the sins of the world are exterminated and deleted, then cast your gaze upon the cross. The Lord placed all our sins on the back of this Lamb. As the prophet Isaiah declares (53:6): “All we like sheep have gone astray; we have turned everyone to his own way,” the one hither, the other yon. One sought God in this manner, another in a different way; there were countless modes of looking for God.”
And as it happens when one loses the right way, and, for instance, turns in the wrong direction at a crossroad, one false decision leads to a hundred others. Thus the one chose the rule of St. Francis for help, the other the order of St. Benedict. And pope and Turk, each according to his own judgment, fabricated his own means of penance for sin. But it is written: “They have all gone astray.” But now, which is the right way, the way that guards against going astray? The farther one strays from the right road, the more confused one grows. Isaiah says that the right way is this: “God placed all our sins upon Him and smote Him for the sins of the people; when we all went astray, God put all our sins on the back of His Lamb, and upon no other. He ordained the Lamb to bear the sins of the entire world.”
Therefore a Christian must cling simply to this verse and let no one rob him of it. For there is no other comfort either in heaven or on earth to fortify us against all attacks and temptations, especially in the agony of death. And whoever believes that this Lamb bears the sins of all the world must regard pope and Turk as the Antichrist. For the pope has taught that the Christian must be concerned with bearing his own sin, atoning for it with alms and the like. This is his shameless lie even to the present day. But if what he teaches is true, then I, not Christ, am yoked and burdened with my sin. And then I would necessarily be lost and damned. But Christ does bear the sin–not only mine and yours or that of any other individual, or only of one kingdom or country, but the sin of the entire world. And you, too, are a part of the world…
This is the basis of all Christian doctrine. Whoever believes it, is a Christian; whoever does not, is no Christian, and will get what he has coming to him. The statement is clear enough: “This is the Lamb of God, who bears the sin of the world.” Moreover, this text is the Word of God, not our word. Nor is it our invention that the Lamb was sacrificed by God and that, in obedience to the Father, this Lamb took upon Himself the sin of the whole world. But the world refuses to believe this; it does not want to concede the honor to this dear Lamb that our salvation depends entirely on His bearing our sin. The world insists on playing a role in this too. But the more it aspires to do in atonement for sin, the worse it fares. For there is no atoner but this Lamb; God recognizes no other.

The Antiquity of Error 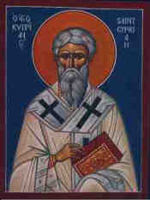 "Custom without truth is the antiquity of error."
Cyprian of Carthage (+ AD 258).
Comment: A particularly useful quote for those who are attracted by the antiquity of Rome, or perhaps better still Constantinople.
Posted by Acroamaticus at Thursday, March 12, 2009