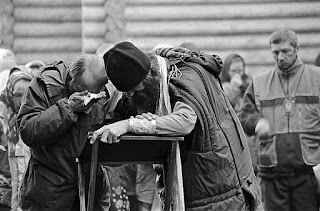 "Justification is both a problem and solution. Oswald Bayer has described human existence as forensically structured. That is to say, that life demands justification. Listen to the way people respond when confronted with a failure. It is the language of self-defense, rationalization, or blaming. No human being wants to be wrong. Or listen to the eulogies delivered at the memorial rites for unbelievers. They are, more often than not, attempts to vocalize why the deceased person’s life was worthwhile. They seek to justify his or her existence. If one is not justified by faith in Christ, one will seek justification elsewhere in attitude or action.
To confess your sin is to cease the futile attempt to self-justify. Rather it is to join with David in saying to God: “Against you, you only have I sinned and done what is evil in your sight, so that you might be justified in your words and blameless in your judgment” (Psalm 51:4). In confession, the sinner acknowledges that God is right. It is to agree with God’s verdict: Guilty."
John T. Pless, A Brief Introduction to Confession and Absolution
Read the whole thing here.
Posted by Acroamaticus at Monday, October 26, 2015