The Appeal to Eastern Orthodoxy by Infant Communion Advocates 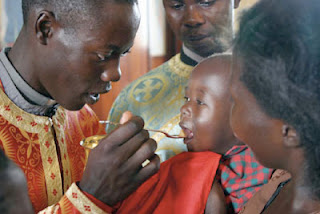 Form time to time in the debate over infant communion in the Lutheran Church appeals are made to Eastern Orthodox (hereafter EO) practice (the EO church communes baptised infants -see the picture of an African example). But while those on the theological left, so to speak, may be swayed by the ecumenical dimension of this appeal, and those on the theological right might be swayed by the antiquity of the EO custom, confessional Lutherans should be wary of appeals to the EO practice as a justification for infant communion.

The antiquity of a practice is not, in itself, an argument in favour of its adoption. One of the earliest known references to infant communion is in passing in Cyprian of Carthage's account of the Decian persecution, which establishes the custom of infant communion as being practiced quite early (3rd C.).  Yet it is the same Cyprian who elsewhere urges a note of caution about accepting customs simply on the basis of antiquity: "Custom without truth is but the antiquity of error".
It seems likely that the misinterpretation of John 6:53 played a part in establishing the custom of infant communion in the early church. Augustine appeals to it, for example, so it is easy to see how other, less tutored minds might also latch on to this verse as a justification for infant communion. But did our Lord intend his words to be taken literally?  If so, no-one who believes, yet who through no fault of their own has not partaken of the Supper, could enter eternal life - the repentant thief on the cross, for example.
The interpretation of John 6 as eucharistic was consistently rejected by Luther both in his early and later years as an exegete. For Luther the spiritual eating and drinking that is by faith was in view in John 6. This was confirmed for him not only on the grounds of the way language is used in the discourse itself but also because to refer John 6 to the Supper was to fall into the error of prolepsis - introducing the element of the Supper into John's narrative before it has been instituted (accepting, as a matter of course, the chronology of the synoptic Gospels).

John 6 also features, of course, in Luther's conflict with Zwngli over the sacramental union in the Supper. But Luther had already adopted his view of John 6 ten years before that controversy reached its zenith at Marburg in 1529, as it appears in his lectures on the Psalms undertaken during the period of 1519-1521. Luther's interpretation of John 6 was not, then, an argument of convenience developed in the conflict with the Zwinglians, but a considered position reached on the basis of grammatical exegesis.
The other texts commonly referred to by infant communion advocates -at least who realise the need for a scriptural "seat of doctrine" for the practice - are the "Let the children..." passages in Matthew and Mark. Yet, in context, neither of these instances concerns the Supper. Again, faith is explicitly in view, not the sacrament. Faith is the instrument by which we are saved, not the reception of the sacrament per se, a view which surely comes close to an ex opere operato view of the sacrament's efficacy. This is not to deny that infants may, and do (!), have saving faith, but it is to point to what is necessary for a beneficial reception of the sacrament. [We'll leave Holy Baptism aside for the present so as not to unnecessarily complicate the argument. Suffice to say that each sacrament must be examined in itself rather than under a general heading of "sacramental theology", under the guise of which much mischievous speculation has been carried out by contemporary theologians!]
Paul's exhortation in 1 Corinthians 11 for the believer to examine his/her conscience before communing leads clearly to the inference that those partaking of the sacrament ought to be of teachable age and mind, so as to be able to "discern the body" (and blood) in the sacrament and examine their conscience accordingly.

Granted, for too long the linking of first communion with confirmation in the Lutheran Church has unnecessarily delayed the full participation of children in the sacrament of the altar. Mindful of Paul's exhortation, the Lutheran Church would, in my view, do well to resolve this disputeby adopting the Roman practice of having first communion around the age of seven or eight, after the candidates have been adequately prepared by the pastor through a study of the sacrament itself and the use of the Ten Commandments as a guide to the examination of conscience. In fact, given that pastoral experience suggests that most parents neglect the teaching of the "Lord's Prayer, the Apostles' Creed and the Ten Commandments" to their children in accordance with their baptismal promises, the introduction of children to the sacrament earlier than generally occurs at present and after age appropriate instruction could surely only be beneficial to their spiritual development (?).

The next problem to deal with is Confirmation...

Pastor Mark, I gather you are not in favour of infant baptism? Ever since I learned about Eberhard Arnold, the founder of the Bruderhof, I have inclined myself towards the idea that adult baptism is the preferable position. Having been formed in the Roman culture, I understand the argument often proposed for infant baptism, though I have the impression that its practice and favour reflect, historically speaking, a higher incidence of infant mortality in earlier ages (e.g. the Black Death).

I think part of the problem is that baptism is often regarded as the “entry” to membership of a particular denomination. People often say “I was baptised a Catholic” or “I was christened an Anglican” or whatever. Mmmmm. As I’ve come to realise, there is no such sacrament. There is only one baptism: baptism into Christ. Thus, we should determine affiliation with a Christian sect – whether Roman, Anglian, Lutheran, etc – by observance of a child’s actual participation and family connection and not by the sacrament. If the sacrament were to be ministered in later life, after due experience, formation and conscious act, the true theology of the sacrament would be more manifest.

I’m something of a cynic myself. But the Hound of Heaven has got me in its jaws, so I remain in a position to continue to see huge gatherings of family congregate on the occasion of a baptism – or a First Communion – because it’s a “great day” and “the kids have to be done”. Some might say that this kind of “religion” is really only how it’s ever been at the popular level and indeed is the truer face of religion now that people can’t be hauled off to the thumbscrews for heresy or witchcraft. I can dig that to some degree. But if we are to discuss sacramentology seriously, we must, I think, view this kind of phenomenon as the symptom of a flaw in infant or childhood baptism and confirmation. Infant baptism makes sense if you believe that without baptism a baby will go to Limbo (or Hell); but it is positively subversive and repugnant if you think that God loves all his creation and there is nothing that He has made that is not good.

No doubt I have reduced the question crudely, but I suggest the essence of my proposition is useful to the topic.

Thank you for your comment, which is, as always, thoughtful.

Yes, I am in favour of infant baptism.

As I believe that baptism is ordinarily efficacious in the case of infants, I would rather think the flaw that too often occurs in our practice of infant baptism is to be found in the follow up - or lack thereof - by parents and Godparents, rather than in the sacrament itself.

In the last thought concerning the goodness of creation, you appear to be overlooking or under-appreciating the effect of the Fall on creation and human beings. It is this which actually renders infant baptism theologically justifiable, apart from what we know about the practice of the earliest church (household baptisms), which seems to derive quite logically from Jesus' command in Matthew 28:19, which contains no limitation as to age.

Btw, I am somewhat reserved about the legitimacy of the notion of a general "sacramentology". I can understand how and why this might develop in Roman Catholicism and Eastern Orthodoxy, with their more elaborate sacramental systems, but as a confessional Lutheran I would rather see a "theology of baptism" and a "theology of the Lord's Supper" as discrete entries in the theological encyclopedia and not subsumed into some systematic theologian's sacramental system, even if that theologian be Thomas Aquinas! :-).

Have you run across any of the material on this topic from the St. Michael's Liturgical Conference? I know it is literally halfway around the world, but it seems you do keep up on some things LCMS. The conference last year included a very intriguing presentation by Rev. Stuckwisch. The paper link is below, although the accompanying video is no longer available. Your closing paragraph made me think of it, although he suggests possibly even younger depending on the child.

Thanks for the link, Paul.

I wasn't aware of the Conference.

Didn't a former pastor of that congregation leave for Eastern Orthodoxy?

Pastor, you are correct. The conference was on a hiatus from Zion for a few years (held at Redeemer Ft. Wayne) after John Fenton converted to Eastern Orthodoxy.

Thanks Paul.
I seem to remember hearing about it on Paul McCain's blog.

There is no need for philosophical arguments. The reasons Lutherans (and other Protestants) do not practice infant communion is because the Church of Rome, from which they historically descend, has ceased communing children long before the Reformation, since toddlers are physically unable to consume hard food (such as bread, for instance), and Rome has abandoned the practice of communing the laity with wine around the time of the Great Schism (in the Orthodox Eucharist, the two elements are always mixed together).

News flash, Lucian: Lutherans do not blindly follow Rome; e.g. we commune on both kinds! Historical precedent is not enough to justify a practice; we have developed a scriptural basis for refraining from communing infants.