Luther Against The Antinomians: They Preach Easter But Not Pentecost 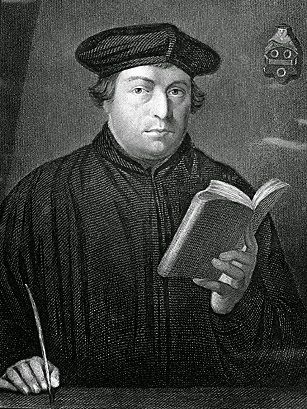 "The apostles at Jerusalem, together with many thousands of the Jews, had been justified by faith alone, i.e., by the grace of Christ; but they had their Nestorius and Eutyches sticking in them and did not see the consequence, namely that the law of Moses did not and could not contribute anything to this, but wanted to give it the idiomata which belong only to the Lamb of God, and said, as we have noted above, that the Gentiles could not be saved, unless they were circumcised and kept the law of Moses. That was the same thing as denying Christ and His grace, as St.Paul says in Galatians 2:21, “If righteousness come by the law, then Christ has died in vain”; and in Romans 11:6, “If it is of grace, then it is not of works.”But those at Jerusalem spoke thus: “It is, indeed, grace alone, but it must also be works alone; for without the law, no one can be saved, though a man must be saved by grace alone, without the law.” In plain German, that is cutting off one’s own nose, and not understanding what one says.
The schools call it, as I have said, antecedens concedere, and consequens negare; or consequens destruere and antecedens affirmare. It is saying Yes and No at the same time about the same thing. This no one must do, unless he is utterly ignorant or a hopeless scoffer.
That is what my Antinomians, too, are doing today. They are preaching finely and (I can think nothing else) with real seriousness about Christ’s grace, the forgiveness of sins, and the other things that can be said concerning redemption. But they flee the consequence of this, as though it were the very devil, and will not speak to the people about the Third Article, which is sanctification, i.e., the new life in Christ. For they think that they ought not to terrify people, or disturb them, but always to preach in a comforting way about grace and the forgiveness of sins in Christ, and utterly avoid such words as these: “Listen! You want to be a Christian and yet remain an adulterer, fornicator, drunken swine, proud, covetous, a usurer, envious, revengeful, malicious!” On the contrary, they say: “Listen! Though you are an adulterer, a fornicator, a miser, or any other kind of sinner, only believe, and you will be saved and need not fear the law; Christ has fulfilled it all!”
Tell me, is that not granting the premise and denying the conclusion? Nay, it is taking away Christ and bringing Him to nought, at the same time that He is most highly preached. It is saying Yes and No to the same thing.
There is no such Christ, Who has died for these sinners who, after forgiveness of sins, do not leave their sins and lead a new life. Thus they finely preach the logic of Nestorious and Eutyches, that Christ is this and is yet not this. They are fine Easter preachers, but shamefully poor Pentecost preachers, for they preach nothing de sanctificatione et vivificatione Spiritus Sancti, i.e., concerning sanctification by the Holy Ghost, but preach only about redemption by Christ, though Christ, Whom they extol so highly (and rightly so!) is Christ, i.e., He has purchased redemption from sin and death, in order that the Holy Ghost shall make new men of us, in place of the old Adam, so that we die unto sin and live unto righteousness, as St. Paul teaches in Romans 6:1, beginning and increasing this life here on earth, and completing it yonder. What Christ has earned for us is not only gratia, “grace,” but also donum, the “gift” of the Holy Ghost, so that we might not only have forgiveness of sin, but also cease from sinning.
Whoever, then, does not cease from sinning, but continues in his former wicked life, must have another Christ from the Antinomians, for the real Christ is not there, even though all the angels were to cry only “Christ! Christ!”; and he must be damned with his new Christ."
Martin Luther, On the Councils and the Church (1539)

1. The saying, most often levelled as a criticism, that Lutherans "Shout Justification! but whisper sanctification" cannot be applied to Luther.

2. It is a false interpretation of Luther born of laziness which claims that his famous rejection of Aristotelianism was a rejection of the use of formal logic and not simply a rejection of the Aristotelian ethic of virtue as applied to Christian sanctification by certain medieval scholastic theologians such as Aquinas (virtue as habitus) which distorted Christianity in the way of works righteousness - Luther's main concern.

Such interpreters delight in Luther's use of paradox to describe truths of Christianity (e.g. simul iustus et peccator), but apparently neglect the place of paradox in Greek logic and rhetoric, where it was already known that paradoxes can promote critical thinking and some can be veridical, i.e. true. Luther's delight in paradoxical statements is not evidence of irrationality in his thought, anticipating post-modern irrationality, but actually rests on his commitment to the law of non-contradiction as classically set forth in Aristotle's Metaphysics.

3. Luther's doctrine of justification did not involve a "legal fiction" because God's declaration of pardon for the sake of Christ is not an empty word but a powerful word which creates a new reality in the life of the sinner through the gift of the Holy Spirit which accompanies it and which equips the believer for the continuing round of death and life through daily repentance and faith. The distinction between justification and sanctification in Luther is notional and theological, but necessary for maintaining the purity of Gospel proclamation over against the perennial human tendency to inject works into the sinner's justification.

May you have a blessed Easter!

A blessed Easter also to you and yours.

the perennial human tendency to inject works into the sinner's justification


Perennial indeed... Even Saint Luke seems to have succumbed to it some two thousand years ago (Acts 10:1-5).

Cornelius was a Gentile 'God-fearer' who believed in the promised Messiah and was justified by such faith.

"Cornelius, Acts 10:1ff , had heard long before among the Jews of the coming Messiah, through whom he was righteous before God, and in such faith his prayers and alms were acceptable to God (as Luke calls him devout and God-fearing), and without such preceding Word and hearing could not have believed or been righteous. But St. Peter had to reveal to him that the Messiah (in whom, as one that was to come, he had hitherto believed) now had come, lest his faith concerning the coming Messiah hold him captive among the hardened and unbelieving Jews, but know that he was now to be saved by the present Messiah, and must not, with the Jews deny nor persecute Him."

Cornelius was a Gentile 'God-fearer' who believed in the promised Messiah and was justified by such faith.

Did anyone say otherwise ?

Also, wouldn't you say that his kindheartedness was one of the main reasons why he ultimately came to accept Christ (who constantly taught people to do such beautiful things), as opposed to the young rich man from the Gospel, whose Judaism lacked such love, and treasured his riches more than his fellow men, and therefore rejected Jesus ? So, his good works, or rather his goodness, which inclined him to do them in the first place, made him capable of accepting Christ, and thus be this saved by faith ?

Any innate goodness he possessed was either before man, not God or the fruit of God's grace acting upon him.