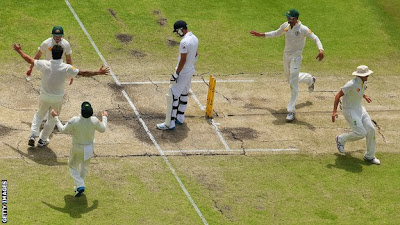 You'd probably have to be Australian or English (or maybe Indian or Pakistani or South African or New Zealander) to get this post, but here goes. If there is a game to be played in the new earth under a new heaven  (in between worship sessions, that is) I hope it's cricket (in the summer, that is - rugby in the winter). A cricket test match is normally played over five days, which perhaps brought forth the American comedian Robin Williams' criticism that cricket was "baseball on valium" ( he was possibly channelling the Irishman George Bernard Shaw, who wrote that "baseball has the great advantage over cricket of being sooner ended"). I respectfully suggest that says more about the American (and GBS's) lack of attention span than about cricket. In any case - let the barbarians have their views - the initiated know that a good test match is like a good novel - it keeps you on the edge of your seat until the very end.

Cricket is Australia's national sport and this summer we've thus far been treated to three good test matches between England and Australia in the five test contest known as The Ashes. There are two more matches to come, but Australia presently has an unassailable 3-0 lead, which means we have won back the Ashes for the first time since 2007. It is no understatement to say this restores national pride and for us at the old manse, who are almost as devoted to cricket as to theology, this momentous event cannot go unremarked upon. Congratulations to the Australian team and commiserations to the English team and their valiant supporters.

The general appraisal by the English press and cricket public seems to be equivalent to that expressed in verse after the first test match series in England in 1882, which originated the Ashes tradition:


Fair and square,
Was it luck that tript us?
Was it scare?
Kangaroo Land's 'Demon, or our own
Want of 'devil', coolness, nerve, backbone?
Until next time, English friends...

Pic, courtesy Getty Images: the immediate aftermath of English batsman Jimmy Anderson's dismissal, which conveyed the Ashes trophy to Australia. His wicket was taken by Australian fast bowler Mitchell Johnson, who with his terrific pace, swarthy good looks and handlebar moustache was perhaps channelling the spirit of the Australian proto-fast bowler Fred Spofforth, the "demon" alluded to in the piece of verse.
Posted by Acroamaticus at Tuesday, December 17, 2013