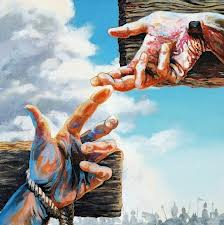 "...one of the criminals who were hanged blasphemed Him, saying, “If You are the Christ, save Yourself and us.”
But the other, answering, rebuked him, saying, “Do you not even fear God, seeing you are under the same condemnation? And we indeed justly, for we receive the due reward of our deeds; but this Man has done nothing wrong.” Then he said to Jesus, “Lord, remember me when You come into Your kingdom.”
And Jesus said to him, “Assuredly, I say to you, today you will be with Me in Paradise.” Luke 23:39-43, from the alternative Gospel of the day, Last Sunday of the Church Year, LCA lectionary.

"Let us see, however, whether the brigand gave evidence of effort and upright deeds and a good yield. Far from his being able to claim even this, he made his way into paradise before the apostles with a mere word, on the basis of faith alone, the intention being for you to learn that it was not so much a case of his sound values prevailing as the Lord's lovingkindness being completely responsible.

What, in fact, did the brigand say? What did he do? Did he fast? Did he weep? Did he tear his garments? Did he display repentance in good time? Not at all: on the cross itself after his utterance he won salvation. Note the rapidity: from cross to heaven, from condemnation to salvation. What were those wonderful words, then? What great power did they have that they brought him such marvelous good things? "Remember me in your kingdom." What sort of word is that? He asked to receive good things, he showed no concern for them in action; but the one who knew his heart paid attention not to the words but to the attitude of mind."


In other words, it is an inner reality. Whether or not it has time and opportunity to blossom or manifest itself is something entirely different. We are only responsible for things which are under our control. Furthermore, in Christianity there's no difference between deeds and thoughts or feelings, since both body and soul were created by God, and we all know Christ's words from the Sermon on the Mount of Olives, that indulgence in (which is not the same as temptation by) lust and hatred are not distinguishable from their offspring of murder and whoredom. The same holds true, in reverse, for those that repent of their sins, and are genuinely sorrowful about their evil thoughts and deeds, and desire salvation. But this reality, even if unseen by the eyes of man (since they can't yet see it or quantify it), is there, it exists, and it is good. And since in God's mind there's no difference between thought and deed, then it is a good deed. As Christ said, "the Kingdom of God is inside you", hence also the words: "truly I say unto you, TODAY you will be with Me in Paradise !": because Paradise was already being born inside the robber's heart, albeit hidden and unmanifested, as Chrysostom points out. Recall now that Chrysostom was Orthodox, and that Orthodoxy is characterized by mystery and mysticism. Note how the two words are not only similar in sound, but also etymologically related, and notice that the latter is an apt description for the inner reality that I was talking about earlier in my comment.

Acroamaticus said...
This comment has been removed by the author.
Tuesday, 03 December, 2013

Mmm...an attempt to make a text say the opposite of what it does say: theological gymnastics!
Lucian, there was indeed an inner change in the thief's spiritual condition, but it was not the cause of his justification but the result of it. The cause of his salvation was on the Cross next to him. Read Paul's Letter to the Romans, or, indeed, just read Chrysostom's words "he made his way into paradise before the apostles with a mere word, on the basis of faith alone, the intention being for you to learn that it was not so much a case of his sound values prevailing as the Lord's loving kindness being completely responsible" again and again until they sink in through your Orthodoxy! Also, Lucian, in your remarks on mystery and mysticism you fall into the etymological fallacy - the meaning of words is not determined primarily by their etymology but by their usage.

The cause of his salvation was on the Cross next to him.

Many were near or next to the Cross, including the thief to the left, and the other Jews, who were still blaspheming Him. But only the one that repented was connected to the cause of salvation. Also, after healing the paralytic and saving the adulteress from stoning, He said to both of them to "go and sin no more". (John 5 & 11). To forgive someone that asks for forgiveness is a matter of love and grace, since the past cannot be undone. The same goes for helping someone that asks for help (to being saved from sin). But this reality is not one-sided. Half-truths can easily become untruths. All major heresies were half-truths, focusing on this or that aspect of either Christ or the Trinity (Sabellianism vs. Arianism; Nestorianism vs. Monophysism, etc).
__________________________________

The historical usage and meaning here in the East is the one that I've already explained.

I don;t think I would disagree with what you have written here, Lucian. Of course, repentance is a necessary part of our conversion, as is faith.
But it is the faith which receives the merits of Christ, like the open hands of a beggar receive a coin from a passer by. Hence th ecry, Lord, have mercy - Kyrie eleison!.