An Analysis of and Response to the New Atheism 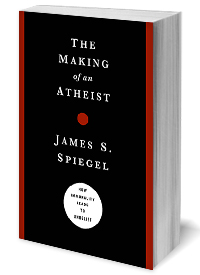 The Making of an Atheist: How Immorality Leads to Unbelief by James S. Spiegel (Moody, Chicago 2010, 141pp).

I draw the attention of readers of this blog to a short book by American philosopher, Jim Spiegel, who argues, following Romans 1:18, that at the heart of the new atheism is moral rebellion against God and not philosophical objections per se. Atheism, he argues, is fundamentally irrational and without adequate philosophical basis and is grounded in the suppression of the external (natural) and internal (conscience) knowledge of God. While not dismissing the role of apologetics outright (there will always be refined and open atheist minds like CS Lewis or Antony Flew who can be persuaded by purely philosophical arguments), he argues that the most powerful Christian response to atheism is a moral one, meaning a life that, by God's grace, cultivates the theological virtues of faith, hope and love.

Spiegel illustrates this thesis by quoting the atheist  English journalist, Matthew Parris (readers  might be familiar with Parris via the Grumpy Old Men TV series), who in 2008 wrote a piece in The Times:  'As An Atheist, I Truly Believe Africa Needs God'. Amidst the decline of the British empire, Parris grew up in several Africa countries and ;ater returned there after a 40 year absence in England, whereupon he was astounded at the transformation of African people and society - a work in progress, to be sure - that he came to attribute to the positive influence of missionaries and growing Christian belief in the vital African churches. Parris does not yet believe in God, but crucially his hostility to the church and its message was broken down not by intellectual argument but by encountering the undeniably positive impact of Christianity on ordinary lives.

As a Lutheran I'd tweak Spiegel's argument here and there and inject the Law-Gospel distinction into it. One also needs to keep this scriptural and avoid importing Aristotelian/ Thomistic notions of how virtue functions in the Christian life, but it offers a perspective on how to approach atheism that I believe is essentially correct. Alert readers will note that this post is not entirely unrelated to the previous post on the plausibility problems of contemporary, scandal-riven Roman Catholicism.

A couple of interesting points:
Spiegel writes that it was a Lutheran (of sorts), Kierkegaard, who was the first modern to develop this apologetic.
Atheism is the "religion of the fatherless" - it is amazing how many prominent atheists in the modern period had dead, absent, weak or abusive fathers!

For reflection: Lutheran theologians of previous centuries were not shy in talking about the theological virtues, but such discussion is largely absent from much modern (i.e. 20th C.) or "neo-Lutheran" theology. Can virtue again be accorded a palce in the Lutheran theological encyclopedia? Yes! By emphasising the primacy of faith in a unified life lived in hope with love.

The book is written in a popular style that any intelligent layperson with an interest in such questions could read and learn from.

James S. Spiegel is Professor of Philosophy and Religion at Taylor University, Indiana.
Posted by Acroamaticus at Saturday, February 23, 2013

People try to persuade us that the objections against Christianity spring from doubt. That is a complete misunderstanding. The objections against Christianity spring from insubordination, the dislike of obedience, rebellion against all authority. As a result people have hitherto been beating the air in their struggle against objections, because they have fought intellectually with doubt instead of fighting morally with rebellion.

I must disagree with Rubati on the grounds he makes a hugely sweeping characterisation of a very personal circumstance. And whilst I agree broadly with the idea that the great appeal of Christianity lies in the lived Christian life (rather than the printed books of its theology)the strength of certain philosophical problems cannot be simply dismissed. One of these is the question of a single final Incarnation in an evolving ageful and diverse human world (and universe).

I don't suggest for a moment that much of the discourse from the mouths of modern atheists is not only well-worn and facile but often plain silly, but this does not mean that many Christian counter-arguments also suffer from a complicated unpersuasiveness and fail to convince a lot of people who would otherwise be ready to believe in someone or something.

Unless James (Professor) Spiegel is making a distinction between atheistic campaigners like Richard Dawkins on the one hand and thoughtful atheists, modernists and Buddhists on the other, I think it must be admitted that atheism is a reasonable position in context. And tying the moral life to atheism sounds (I haven't read his book yet) always like a wild assertion.