It strikes me that this, from the UK's Guardian newspaper, is a story that deserves more coverage than it is getting:

'The leader of Ireland's Catholics has criticised the republic's government for closing its embassy to Vatican City. Cardinal Sean Brady expressed his "profound disappointment" over the move, which comes after diplomatic clashes this year between the Fine Gael-Labour coalition and the Holy See over the Vatican's handling of the clerical child sex abuse scandals in Ireland.' 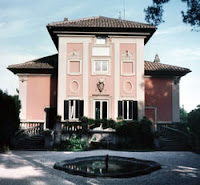 The official explanation is that Ireland's acceptance of an IMF funded rescue package in the wake of the GFC of 2008 has necessitated cuts including the closure of several embassies which provided 'no financial return', for a saving of c. AUS$2 million. However the 'background' to the story includes a parliamentary speech in which the Irish Prime Minister (the Taoiseach) Enda Kenny strongly criticised the Vatican for 'downplaying the rape of children in order to protect its power and reputation'. At the time, Kenny received strong support for his statement from the Irish people, and even the Archbishop of Dublin called his comments a 'wake-up call for the church'. The Vatican's response, however, was to recall its ambassador (the papal nuncio) to Rome.

Kenny's party, the Fine Gael, has traditionally been an upholder of the traditional role of the Roman Catholic church in Irish life, and the Irish embassy in the Vatican (pictured) is one of Ireland's oldest diplomatic missions. Given this history, and the highly symbolic value attached to the closing of an embassy for whatever reason, particularly in these circumstances, and it's difficult not to see a sub-text here to the effect that the Roman Catholic church will no longer have the central role in Irish life that it once did. Anyone who understands what that role has traditionally been will also understand how astounding this shift is.

Note - 30% of Australians claim Irish ancestry and the Roman Catholic church is the largest church body in this country. In 2008 Australia appointed its first resident ambassador to the Vatican.
Posted by Acroamaticus at Saturday, November 05, 2011

Email ThisBlogThis!Share to TwitterShare to FacebookShare to Pinterest
Labels: Current Events, Why I Am Not Roman Catholic