It's All About You 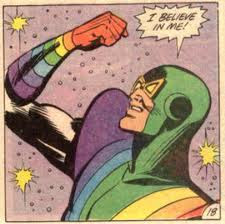 I don't like to be gratuitously critical of other Christians at the old manse, but something just crossed my desk yesterday that almost caused me apoplexy and just cries out for comment. In the last post I tangentially mentioned the growth of 'Pentecostals' in Australia. I have to confess I've never found Pentecostalism remotely attractive or interesting; in fact I find it downright strange. So, never having had much to do with it, never having even visited a Pentecostal worship service, I was always mystified by its growth in popularity through the 1980s and 90s as groups that were once fringe dwellers on the Australian scene built up empires and courted - and won - political influence. All this happened, mind you, just as the 'mainline' churches began to lose numbers and influence (I'm convinced the growth of Pentecostalism has been largely at the expense of the 'mainstream' churches - that raises a lot of questions for both sides).

Now, just when I think I can explain the rise of Pentecostalism (that's for another post), it has morphed into an entirely new creature. Sociologists of religion apparently call it 'neo-Pentecostalism', but I call it the 'religion of narcissism', because it's all about you! Of course, such a religion is tailor made to flourish in a self-obsessed culture like ours. For example, just check out the spiel that headed a flyer that landed in my mailbox yesterday, sent out by a 'neo-Pentecostal' church in Brisbane advertising a worship conference 'experience' they have planned, 'The Ultimate Worshiper':

'The Ultimate Worshiper has been birthed to raise up, equip, encourage and resource an army of worshipers to become the ultimate of who God has called them to be.'

If I had the technology I'd scan it for you, but underneath the headline is a picture of the husband and wife pastors of the church and several guest speakers, who, with their designer stubble and blow-dried hair, look for all the world like post-modern, trying too hard to be hip versions of Barbie and Ken...the upwardly mobile types who drive BMWs too fast down the narrow leafy streets of the once sedate inner-city suburbs of my home town, which has become the boom town of contemporary Australia and thus full of the perfect fodder for this new religious movement to feed on (Btw, does anyone know: is it somehow mandatory for these churches to have husband and wife pastor teams? And whatever happened to the unworldly pastors/priests who had regulation haircuts, wore off the rack dark suits and horn-rimmed glasses? Their appearance at least conveyed gravitas - what does a blow-dried coiffure say?).

Now, if the tortured syntax and jargonese ('birthed'?) aren't enough to irk you (memo to whoever's responsible for this: in Australia we spell it 'worshippers'), doesn't the thought of spending a weekend with people who aspire to be the 'ultimate of who God has called them to be' just make your head spin and your stomach queasy? Yet a lot of people seem to 'buy' this stuff, for the flyer informs me the church has grown to 5000 members in ten years. In the Australian context, that's quite amazing. But I wouldn't be at all surprised to discover that a majority of these folk are former Catholics, Anglicans, Reformed, Orthodox and Lutherans. It just goes to show that it's really not very hard to 'grow' a church, even in the late-modern, post-Christian, religious wasteland of Australia - the secret is just to tell people what they want to hear.

Same here in the USA. If you can rent the movie "The Apostle," I find it a fairly true depiction of the Pentecostal scene.

People want to be entertained.

Jon, I've been meaning to watch 'The Apostle' but my local store doesn't have it.

Anyway, I think this 'neo-Pentecostalism' is _the_ 'new religious movement' of the time.

Pastor Mark, there was a little note of scorn in your comment on the new Pentecostal phenomenon "it's not hard to grow a church....just tell people what they want to hear", that I think was unwarranted.

In my view, everyone associates and affiliates with the group or church where they hear what they want to hear. Some want to hear a message of empowerment and growth or prosperity or election; others want a message of guilt and sin and forgiveness; others want a picture book heaven filled with angels and spirits and priests in gorgeous raiment chanting glorious King James English or sonorous Latin....and so on.

We can of course distinguish between the idea of faith as an objective content, and the idea of faith as an act of will, but the two blur and merge inevitably. I am alternately bemused and exasperated by those who insist that access to God or to an attitude of reverence to God is for all significant purposes restricted to their own religious perspective, which remains - psychologically speaking - a matter of preference and not privileged insight. The action of grace on a person's will is not something that is self-evident to anyone else, though some of us sometimes think we can identify x or y as an example of it.

I myself am left emotionally untouched, even offput, by glad-handing clappy modes of worship; I only feel religiously "at-home" where the solemnity of prayer and lectionary broadcasts a sense of "other" and the sacred. But I don't delude myself that this is much more than a product of my strongest formation and experience. If indeed I was called to my particular experience and context, this must apply no less to anyone else. The only reasonable alternative is to conclude that no-one is called to any religious context, rather we have to work within the contextual deck in which we find ourselves.

Or so it seems to me. I repeat, we all go where we will hear what we want to hear. What we want to hear is what we think is true or good; though in a sense it seems reasonable to say we can't all be right, our powers of persuasion and our readiness to be truly open to an alternative message are, I suggest, really limited. So the weakest criticism one can make of "prosperity Gospel" or enthusiastic religion is to say they only want to hear what they want to hear. It's too dismissive and universal to be an effective criticism: there are other and better ones, like they appear to engender classism, exclusivism, pre-destination (in a complacent sense) and materialism, or narcissism. Etc Etc.

'In my view, everyone associates and affiliates with the group or church where they hear what they want to hear. Some want to hear a message of empowerment and growth or prosperity or election; others want a message of guilt and sin and forgiveness...'

Stephen,
There seems to be a relativism at the heart of your judgment, a relativism which effectively denies the authority of truth. Yes, we all want to hear different things, but what do we need to hear? The Gospel! But instead, people today 'do not endure sound doctrine, but according to their own desires, because they have itching ears, they heap up for themselves teachers and turn their ears away from the truth' 2 Timothy 4:3

Pastor Mark, I cannot see how you can call what I said a “moral relativism that denies the authority of truth”: I think I said towards the end words to the effect that we could not all be right and that it was possible to make other, more valid criticisms of divergent religious adherence. Indeed I thought the way I expressed the universality of the propensity or tendency to go where we thought it good for us as an observable phenomenon did not in any way imply that everything that everyone heard or went towards was right or good or true.

I certainly think that the mysteries and challenges of God and the universe are known only “through a glass darkly” and that no expression or understanding is perfect, but I am not a relativist in the sense that the word is often (and excessively and incorrectly) bandied about: I do believe that things are and are not, but the cogency and persuasiveness of any one particular claim to religious truth is not straightforwardly simply an intellectual exercise. If it were, I am sure there would be less diversity and passion about it all.

No, the point of my piece was that I thought you’d wrongly impugned the basis of adherence and affiliation.

I would propose that we are all capable of self-deception in the matter of truth and the extent of our apprehension of it. I think we all think that what we think makes sense or fills our need is right or true and that anything else is misguided or wrong...until we reflect that others think exactly the same thing and realise we have to take pause and grow (learn) a little more. Either we grow or we die, so to speak.

I hope that clarifies where I am coming from.

Yes Stephen, thanks for that. Now, given that many, if not most, of the adherents of neo-Pentecostal churches come from mainstream churches (I could gather the evidence to support this, but let's just accept it for argument's sake), they have made a decision at some point to reject more or less sound teaching and align themselves with false teaching. No doubt there are as many reasons for this as there are individual cases, and I'll even concede that in some cases the mainstream churches may themselves bear some responsibility for this. But, this puts the adherence to neo-Pentecostalism in a completely different light from a case where a person's only experience of the church is a neo-Pentecostal experience, although even then the witness of the scriptures to the truth does not leave them without excuse.

My pastor was discussing the pentecostal phenomenon during Adult Education and he said that Pentecostals are always saying they have a "word from the Lord."

Never mind that it may contradict the Word of God, preached or written.

I remember how divisive the Charismatic Movement was in the 70's. Even got a toehold in the Catholic church.

Power to the People said...

It's All About You

(Glad to see you finally admit it!)