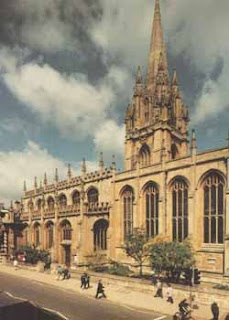 Atheists in the pulpit, divine service optional - that seems to be the future direction of the famed Oxford University, hitherto a bastion of the Anglican Establishment in England.

In February, it is reported, well-known author Philip Pullman, a self-described "Church of England Atheist", in other words a "cultural Anglican" but not an actual believer (reminds me of the old joke: "Are you Christian? No, C of E."), preached - "gave the address" is often the euphemism used on such occasions - in the University Church of St Mary's, Oxford.

In order to fully understand the symbolic import of this unhappy event, it might help to rehearse some of the history of St Mary's, Oxford. This is the hallowed site of the trial of bishops Cranmer, Latimer and Ridley, at which they each received the sentence of death by burning for adhering to the principles of the English Reformation. It is also the church where John Wesley preached his famous sermon on 'Justification By Faith', leading to the Evangelical revival in the Church of England. From the same pulpit, some one hundred years later, in 1833, John Keble preached the famous Assize sermon on national apostasy, which marked the beginning of the controversial and divisive, but influential 'Oxford Movement'. John Henry Newman, the leading light of that movement, also preached regularly at St Mary's when he was still an Anglican and resident at Oxford.

However mistaken, from the Lutheran position, these men may have been on some doctrines of the faith, they were at least professed believers, not atheists. And even with Lutheran reservations about aspects of the public doctrine of the Church of England, one can still apppreciate the great historical significance of this particular church not only for English Christianity but for world Christianity. Sermons preached from the pulpit of this church have echoed down the centuries and around the world and led to orthodox missionary endeavours that have brought literally millions into the kingdom of God. But aside from that history, this is a church dedicated to the glory of God and built to serve the edification of his Anglican people at Oxford University, an historically Anglican institution. What business does the rector of the church have to invite an atheist, even one who claims to respect the church as an historical institution, to preach - or even "give an address" - in this church? Does the Church of England have a death wish?

This event follows quickly upon the approval, given in January by the university's governing council, to one Oxford college's (Hertford) proposal to remove the constitutional requirement to appoint religious chaplains (i.e. C of E clergy), along with the requirement upon them, when they are appointed, to conduct regular divine services. So, we have atheists in the pulpit, and clergy who, when they are employed, will not be expected to lead public worship. Truth is indeed stranger than fiction in late-modern Oxford.

Now, an enlightened pluralist observer of these developments might well respond: "Well, Oxford University is simply beginning to reflect the multi-cultural, multi-religious face of present-day England. Why should Christianity, especially the flabby, undisciplined, middle-of-the-road version of it that prevails in the Church of England, receive special treatment when most of the students are probably agnostics?" Agreed, the situation of established European churches, pallid heirs of the riches of the long-dead ideal of Christendom, is becoming increasingly untenable as their societies hurtle towards non-belief and moral confusion, and disestablishment is indeed a discussion that Oxford University and eventually England will one day soon have to have. But, in the meantime, bear in mind that this University still admits graduates to degrees with a solemn 'in nomine Patris, et Filii, et Spiritus Sancti' as a New Testament is momentarily placed upon their head. God cannot be mocked with impunity.

Meantime:
Australian academics (including an Anglican priest) call for end to Special Religious Instruction in Australian schools in favour of multi-faith education
[http://www.theage.com.au/national/education/academics-call-for-review-of-school-religious-teaching-20110406-1d4h5.html]

and,
Christian Foster Carers Seek Reversal of Council Decision Against Them
[http://christianconcern.com/our-concerns/sexual-orientation/christian-foster-carers-campaign-for-re-instatement-by-derby-council]
Posted by Acroamaticus at Thursday, April 07, 2011

Email ThisBlogThis!Share to TwitterShare to FacebookShare to Pinterest
Labels: Anglicanism, Church and Society, Church of England, Ministry in Late Modernity, The New Atheism

One has to wonder what these clerics think of their ordination vows? I spoke them with fear and trembling (quite literally) and I revisit them often.

Generations of "progressive" clergy have seriously wounded the Church of England. They would have felt at home in the time of the first century Roman Empire: Christ is one god among many (chose your favorite) and all is o.k. in the world.

Does one 'enjoy' a Bergman film, Lucian?

One has to wonder, yes.

A news report from a few years ago:

"The son of Michael Howard, the former Conservative Party leader, has spoken for the first time about his distress at being turned down for ordination by the Church of England.
Nick Howard, who completed a theology degree this summer, was not ordained because of his "unwillingness to listen" to other viewpoints.
He told The Mail on Sunday that his strongly held evangelical beliefs on homosexuality and multifaith worship marked him out as a "troublemaker" even though they reflect official Anglican doctrine.
During his three-year training at Cranmer Hall, a theological college attached to the University of Durham, Nick discussed his concerns with tutors but found little comfort in their "blase attitudes". Fellow students, although often sympathetic to his orthodox views, did not want to incur the wrath of college authorities by speaking out."

A perfect example of "Neuhaus's Rule": 'where orthodoxy is optional, it sooner or later becomes proscribed.'

Does one 'enjoy' a Bergman film, Lucian?

I've actually seen it on TV some years ago. Nice B & W cinematography, but I found the story a little far-fetched. If the first rule of good story-telling is to get the reader/viewer/listener to suspend their disbelief, this failed. I've seen other Bergman films that were quite fascinating, though.