Sasse on Ecstatic Religious Experience (with thoughts on 'Pentecostalism' appended) 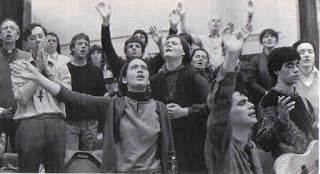 "Just as the Bibical concepts of resurrection and eternity are hardly any longer understood in modern Christianity, so also the understanding of the Holy Spirit has more and more disappeared. One does not yet know who the Holy Spirit is if one knows the workings of the Spirit or of spirits as reported in the epistles of Paul. He tells of speaking in tongues, of prophecy, of visions, of things heard, of gifts of healing, of the power to do miracles, and all sorts of gifts. Most of these phenomena do not belong only to Christianity but are found in many a religion. They are native to ecstatic religion, which is found all over the world. Here a person thinks of his powers and capacities as intensified into the supernatural because divinity is at work in him. Such primitive expressions of ecstatic religion were much prized in Corinth as evidence of possessing the Holy Spirit. Paul himself had experience of them, and yet he ranks them less than the silent working of the Spirit of Christ. In making this distinction, he does the same as the prophets of the Old Testament. They had such experiences too, and yet they decisively marked themselves off from the ecstatic seers and professional prophets. What is the significance of this distinction? It is connected with the distinction between true and false prophets and so also the scrupulous distinction between God and man - between what is truly God's doing and what is not."

Consider the two images below from the world of Hinduism; the first appears to be a group of Krishna devotees, while the second is a group of worshippers of the goddess Kali. In both instances the worship involves the use of repetitive music and chanting/singing, along with rythmic body movement, in order to induce feelings of ecstasy, which are then interpreted to be an encounter with the god who is being worshipped. It would not be too difficult to find similar images from the worlds of Islam (Sufism) and of course tribal religion/animism. Anyone who has travelled widely outside the first world and/or lived closely with devotees of non-Christian religions will be aware of the ecstatic dimension of these religions which, as Sasse notes, is universal. [Just in passing, I have met devoted Hindus who have a statue of Jesus in their prayer corner/altar along with the other gods they worship, and to which they pray earnestly. What they cannot do, however, is bring themsleves to make the confession that 'Jesus is Lord'; Hinduism can accomodate all gods.] 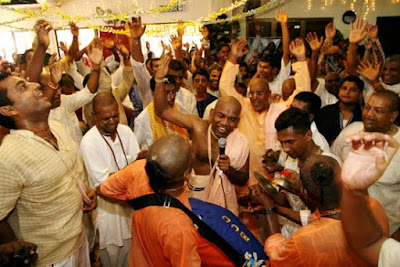 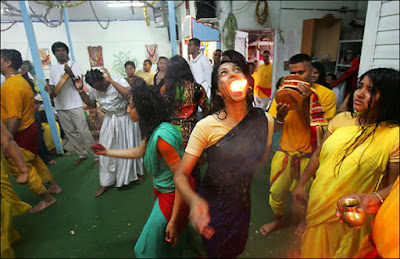 Then consider the obvious external similarites of ecstatic religion as displayed above with 'Pentecostal' worship (OK...I haven't yet seen Pentecostals literally breathing fire either, but you know what I mean: the repetitive music, rythmic movement, de-individuation, etc). I have always been sceptical of Pentecostalism and the Charismatic movement (see my post below on 'Settled Science' for a confession of my scepticism! One day I'll explain why my scepticism doesn't extend to the Bible). I do not a priori question the sincerity and faith of those who involve themselves in Pentecostal worship, nor do I question the extraordinary nature of some of their experiences. But I do believe that they represent nothing more than another attempt to divinise the self through an intense and induced (as opposed to imparted) experience of ecstasy. The difference between Pentecostalism and other forms of ecstatic religion is that the experience is interpreted through a Christian lens, and in true Pentecostalism the experience is theologised as worship after the pattern of the Jerusalem Temple, with various levels of closeness to the Spirit, culminating in entrance to the Holy of Holies.

However - and here is the most obvious problem - in the process the God-given means of communion and grace (Word and sacrament) are neglected or played down, and (most problematically) their efficacy is denied. This raises for me the question of just what in Pentecostal worship is actually Christian? Given this, the crucial question, then, for Pentecostals is related to the point at the end of the Sasse quote: What in their expression of Christianity is truly of God, and what is only of man, extraordinary though it may be? But I have not yet met a Pentecostal who was prepared even to consider this question, "lest the Spirit be quenched". Sadly, I have met a number of ex-Pentecostals for whom the whole experience has left a bitter after-taste, sometimes to the point of inducing profound scepticism as to the truth of any form of Christianity at all.

Sasse's essay was written in 1931, btw...that's thirty years after what is usually recognised as the inception of modern Pentecostalism by Charles Parham in Topeka, Kansas on January 1, 1901. For more Sasse quotes, see my other blog 'What Sasse Said'; click on the post title above to view.
Posted by Acroamaticus at Tuesday, March 08, 2011

An excellent discussion, Pastor. All those forms of worship you have discussed center on feelings, which can be very fleeting and change from moment to moment.

A wise Christian once observed that authentic Christian "joy" has nothing to do with feelings. It is a steady assurance of the utter trustworthiness of the Gospel and the One who is the center of it no matter what our daily circumstances.

Jesus has chosen to meet us in Word and Sacrament and no amount of feelings can replace that.

Of course, that doesn't mean that human emotions have no place in worship, who hasn't been stirred by the beauty of a hymn or edified by a sermon.

Pentecostalism has proven to be very divisive among various denominations.

Exactly right, Christine. Feelings are not the basis of our faith, Word and sacrament are. But feelings can be sanctified, and should not be rejected out of hand. Sometimes Lutherans have erred too far in the direction of rejecting feelings all together. I have a good quote from CFW Walther on the question of religious feelings which I may post soon.