Sasse: There is no Christian faith which is not based on the Word of God 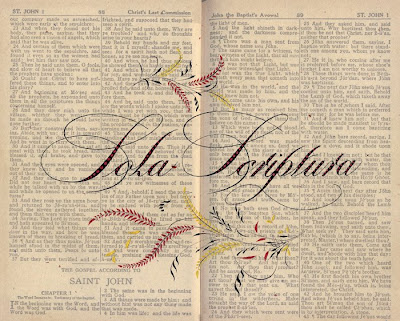 We continue our series on Sola Scriptura with more from Sasse's speech, Holy Church or Holy Writ? (1967). The reader will recall that this speech was Sasse's response, as a confessional Lutheran, to Dei verbum, the 'Dogmatic Constitution on Divine Revelation' approved by the fathers of Vatican II and promulgated by Paul VI on 18 November, 1965. As such, this is not a systematic treatment of the Reformation doctrine, but an occasional expression of it in light of the given topic. Nevertheless, we think it serves as a good introduction to the doctrine of Sola Scriptura, particularly as Sasse is so adept at discussing the doctrine in the light of the large historical forces which have been working against a clear conception of it since the Reformation. There is one more extract from Sasse's speech to come, after which we will summarise his points and move forward in this series.

"But there must be, we are told, an infallible teaching office to explain the Scriptures. If God wanted to reveal himself to men, he would not give them only a book which can be and is being interpreted in various ways. It is a logical conclusion that he must have provided a living teaching authority, whatever it may be, a council or a pope or a theological faculty or some church committee. What is the use of a revelation which every individual can understand at his pleasure? This was the argument of Erasmus also in his great contention with Luther. Why did this great leader of European culture and scholarship, this mastermind of his time, refuse to accept the Reformation? The encounter between the Reformer and the great Humanist was an event of the fist magnitude in the history of European culture. For it foreshadowed what was going to happen in the subsequent centuries until the present time. 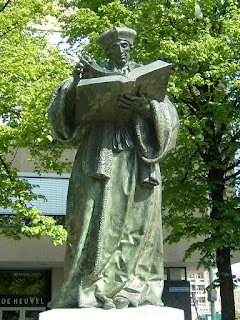 In his De libero arbitrio diatribe Erasmus defended in the free will of man what was to him the dignity of man. This was threatened by Luther’s doctrine that man is a poor miserable sinner who can do nothing for his salvation. That man is weak, imperfect and inclined to all sorts of sin, Erasmus would admit. He was very realistic in his view of man after all his experience as the son of a priest. But it was the sola gratia, by grace only, which he rejected. And he defended God against Luther, God who is good and not a tyrant who condemns people who can do nothing but sin. God is light and not darkness, as his disciple Zwingli a few years later maintained against the Reformer of Wittenberg. And he attacked Luther’s treatment of scripture. The Sola Scriptura is closely linked with the Sola Gratia. To understand Scripture we need scholarship, the knowledge of the interpretation by the Fathers and the guidance of the Church. We should be careful with our own judgment. Luther, he feels, is too dogmatic. Scripture is full of mysteries. We should abstain from those ’firm assertions’ in which Luther indulges. Over against Luther’s dogmatism he confesses that he would rather side with the sceptics. In all these points Erasmus speaks on behalf of modern man who, though knowing of man’s weakness, has not given up his belief in man; who believes in grace, though not in grace alone; who wants the Bible, but not the Bible only; who wants to retain Christianity, but an undogmatic Christianity; who believes in God, in Christ, but whose faith is always intermingled with a certain amount of scepticism. 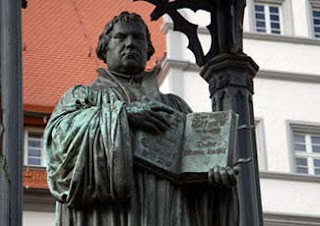 What is Luther’s answer? There is no Christian faith which is not based on the Word of God, and the Word of God we find in the Scriptures, and in Scripture only. The Fathers can err. Traditions are human. Whether they convey to me the truth. I cannot know unless I see that their content is confirmed by the Scriptures. To the objection that the Scriptures are sometimes dark, contradicting each other, and therefore in need of an authoritative interpretation, Luther replies with his doctrine of the claritas sacrae Scripturae, the clarity of the Scriptures. As a Biblical scholar, Luther knew, of course, of the problems of exegesis. The clarity of the Scriptures is not the clarity of a text-book on mathematics or of a historical work written according to the rules of modern historiography. Their clarity lies rather in their content. This content, the content of the entire Bible (Luke 24:44, cf. Acts 10:43: ‘To him all the prophets witness, that through his name whosoever believeth in him shall receive eternal remission of sins’) is Christ. 'Tolle Christum e scripturis, quid amplius invenies?’ (Take away Christ from the Scriptures, and what else will you find?)." 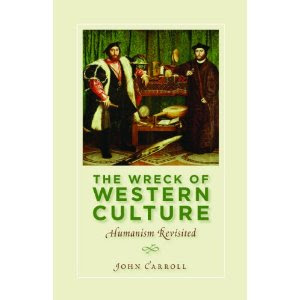 It's not strictly apropos our topic, but while on the subject of Erasmus and Luther, readers might be interested to follow up John Carroll's book, Humanism: The Wreck of Western Culture, 2nd edition published as The Wreck of Western Culture, Humanism Revisited. The author is not Christian (I believe he is a lapsed Catholic), but he laments the loss of a religious authority in Western culture, and, like Sasse, he finds the debate between Luther and Erasmus to be one of the key moments in this loss. Carroll paints with a broad brush, and his argument sometimes suffers as a result, but he has some magnificent insights nonetheless, one of which being that when the West chose Erasmus over Luther, it effectively sealed its secular fate. This is a refreshing view at a time when one so often hears it said that Luther contributed to the decline of Christianity in the West, a thesis beloved by Catholics, particularly converts from the various Protestant churches. I find it difficult to believe that anyone actually informed by a sympathetic and wide reading of Luther would ever make such a comment.
Posted by Acroamaticus at Wednesday, January 26, 2011

Very enlightening, I did know of the debate between Erasmus and Luther. However, I do agree with the Lutheran view, considering the Roman Catholic Church has had too much leeway for interpretation by placing itself outside the doctrine of sola Scriptura, i.e. Purgatory, which is a figment not contained in the Bible.

SC,
Carroll's book is worth reading; I'm sure it must be in university or public libraries over there. The relevant work by Luther is 'The Bondage of the Will'. Some years ago there was an edition published with a forward by J.I. Packer which contained both Erasmus's work and Luther's reply, which is most helpful for understanding the matters under discussion.

Schütz said...
I'm just going to say that for all his excellence, I don't think Sasse quite gets to where you want him to get. He does still end up with private interpretation. "The Fathers can err. Traditions are human. Whether they convey to me the truth. I cannot know unless I see that their content is confirmed by the Scriptures." And can I err in my reading of the Scriptures? That's the point. Of course, it is interminably thrown back at us that even the teaching of the living magisterium needs to be received, interpreted and believed. Who will save me from this miserable predicament?! Thanks be to God in Christ Jesus our Lord!

Thanks for your comment, David.
Of course, we need to make the move from the individual conscience before God to the church's teaching office for the discussion to be furthered; that's where the discussion should be centred. As to private judgment, even Catholics have to own the Catholic dogmas, don't they (unless Rome is still content with its adherents having a "coalminer's faith")? Even you exercised "private judgment" in the course of swimming the Tiber; unless it was a blind submission to Rome? In any case, I'll be discussing these matters further down the track. Good to know you're following the series.