Heretics, Sectarians and 'The Lutheran Difference' 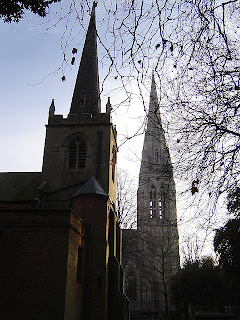 A few weeks ago I was talking to an ex-Lutheran come Pentecostal who attended Divine Service at one of the congregations I serve. He handed me his business card which indicated he had a "ministry" leading short stay mission trips in Africa.

"Of course", he opined, early in the conversation, "the Africans aren't interested in what label you bear, 'Lutheran' or 'Anglican' or whatever, what they want is basic Christianity."

"I see", I responded, trying to maintain my best poker face, and after a pause I continued, "and what doctrine do you teach them?"

Bingo! What he taught them, as I expected, was Pentecostal doctrine - water baptism on profession of faith, baptism in the Holy Spirit with tongues as a separate experience from water baptism, an emphasis on the more spectacular spiritual gifts such as healing and prophecy, a Zwinglian doctrine of the Lord's Supper, a semi-Pelagian doctrine of original sin and a pre-millennial doctrine of the rapture and second coming of our Lord.

This eclectic concoction constituted the “basic Christianity” by which this man thought he was called - directly by God, of course - to enlighten the African people. And it’s quite probable he was actually 'evangelising' and 'catechising' people who were already “Lutheran, Anglican or whatever”, since most of the parts of Africa that are easily accessible to Western tourists have been Christian for 100 years or more. For some reason I doubt he was taking his mission tourists to the Sudan where there are real conversions to be made among the Islamic militias!

As I have stated in these glosses before, I don’t believe there is such a thing as “basic Christianity”, in the sense of some pre-theological, non-doctrinal, supposedly pure version of Christianity that we could discover if we could just somehow jump over 2000 years of church history. People who advocate “basic Christianity” are either naïve, confused, ignorant, duplicitous and/or probably about to start a new sect. We might wish it were so, but what we actually have in this world, whether we like it or not, are several exclusive versions of Christianity that happily share a good deal of orthodox doctrine inherited from the early church, but who also each hold exclusive articles of faith which are deemed important enough for the faith and life of their adherents to warrant ecclesiastical separation from those who teach otherwise. This separation is deemed necessary to preserve the doctrinal purity of the body. Unless a church body has completely relativised all doctrine, it holds to some form of this position, because it understands that doctrine and life are intimately related. Even liberal churches enforce doctrinal standards!

This has always made perfect sense to me, even when I was a “seeker” and then a neophyte. It seemed to me then that a church body which did not care enough about what it believed to delineate itself in some way from other, differing church bodies probably didn't believe in much to begin with and wasn't worth exploring (in actual fact there are "post-Christian" churches like this, but that is a subject for another post). Since those days I have learned much about the Gospel and grown to love it even more, and that has made me zealous to guard its truth. The Gospel is, after all, "the power of God for salvation".

And so, in spite of all I hold in common with Roman Catholics and Eastern Orthodox, namely the creeds of the early church and the heritage of the Fathers, I could not in good conscience join in worship which included prayers to Mary and the saints. Apart from the lack of scriptural warrant for such prayers, I suspect that at heart this practice reflects a different understanding of the Gospel. Similarly, as much as I share a passion for justification by grace through faith alone with the Reformed, I couldn’t commune at a Lord’s Supper with a congregation which does not confess that the bread and wine are the true body of Christ given into death for us and the real blood of Christ shed for the forgiveness of our sins. To do so would be, to my mind and conscience, a denial of the Gospel (the sacrament is the Gospel...for me).

It is not that I am questioning the salvation of Catholics or Orthodox orPresbyterians. They certainly have enough of the Gospel to be saved, it’s just that they don’t have enough of the Gospel for me to recognise them as church in an unqualified sense. Their doctrine needs to be informed and reformed by the Gospel before I could acknowledge them as such. I write in the first person, but it should be said that such is the position held by all confessional Lutherans. In holding this view we are following the Augsburg Confession, which states that "[t]he Church is the congregation of saints, in which the Gospel is taught purely and the Sacraments are administered rightly ."

Now, this is undoubtedly a deplorable state of affairs, both in the eyes of the world and before God. But the blame for it lies not with the teachers of Biblical orthodoxy and Gospel truth, nor even with those heterodox believers who have innocently and sincerely adhered to what their mother church has taught them, even though it is error-laden when compared with scripture (more needs to be said on this). The blame lies rather with the teachers of outright false doctrine who have led others - sometimes millions - astray (the heretics), and with those who have separated from their mother church without due reason (the sectarians). It is the promotion of false doctrine that is deplorable, because, at the least, it renders the proclamation of the Gospel in a particular church impure; and, at its worst, it undermines and overthrows the Gospel completely. Sectarianism, on the other hand, which is almost as deplorable as false teaching and heresy, is a sin against love and tears the outward body of Christ apart for no valid reason.

Now, all of this is by way of preamble to my main point today, which is to recommend to Lutherans, and to those “seekers” who I know read these glosses, a new book published by Concordia Publishing House in the US and titled The Lutheran Difference, An Explanation and Comparison of Christian Beliefs [see info here: http://www.cph.org/p-18153-the-lutheran-difference.aspx?SearchTerm=the lutheran difference]. It retails for US$29.99 and extends to over 600 pages, in which various articles of faith and heads of doctrine are examined with a view to setting forth clearly where and why Lutherans differ from other confessions or denominations in our teaching. 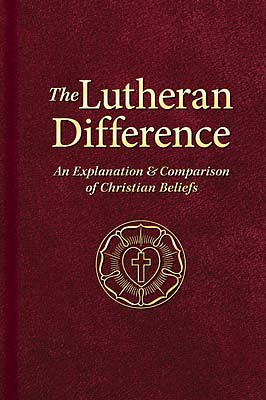 Of course, pastors are expected to - and should - know these things, but increasingly lay people too need to know what their church teaches and what other denominations teach. Not just so that we can hold our own with people like the Pentecostal I met at the after service cup of tea, but, much more importantly, so that we can be assured of the scriptural basis of our faith (Acts 17:11), strengthened by grace (Hebrews 13:9), and not tossed about by every wind of doctrine (Ephesians 4:14). Such is God's will for you, and here is a resource that will help you to obtain such assurance, strength and certitude.

(Click on the post title to view a sample of the book, courtesy CPH)
Posted by Acroamaticus at Monday, December 06, 2010

What a great example of the so-called "basic christianity" floating around.

Also, what a great new book - thanks for spreading the word!

Take up and read, Eric.
Thanks for dropping by.

Thanks for your kind words, Christopher.
Drop by the 'old manse' again.
I shall link to your blog,as I like to stay in touch with my commenters.

Hi Pastor Mark. I have commented on this post on my own blog: "Mere Christianity" leads to "Mere Ecclesiology"(http://scecclesia.com/?p=4703).