John Chrysostom on the Repentant Thief 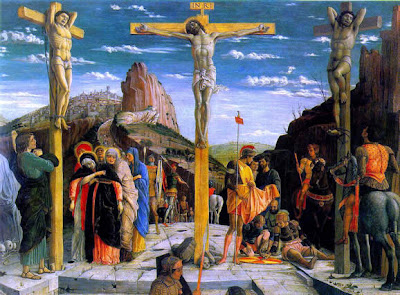 I'm reprising this post from a year ago as a follow up to my previous post on Indulgences. It shows that John Chrysostom, one of the greatest preachers of the ancient church, knew nothing of a purgatory after death for believers who had not suffered sufficient temporal punishment for sin in this life (the Roman Catholic doctrine). Note that, according to Chrysostom, the repentant thief entered Paradise before the Apostles, "from cross to heaven", on the basis of his "faith alone".

"Let us see, however, whether the brigand gave evidence of effort and upright deeds and a good yield. Far from his being able to claim even this, he made his way into paradise before the apostles with a mere word, on the basis of faith alone, the intention being for you to learn that it was not so much a case of his sound values prevailing as the Lord's lovingkindness being completely responsible.

What, in fact, did the brigand say? What did he do? Did he fast? Did he weep? Did he tear his garments? Did he display repentance in good time? Not at all: on the cross itself after his utterance he won salvation. Note the rapidity: from cross to heaven, from condemnation to salvation. What were those wonderful words, then? What great power did they have that they brought him such marvelous good things? "Remember me in your kingdom." What sort of word is that? He asked to receive good things, he showed no concern for them in action; but the one who knew his heart paid attention not to the words but to the attitude of mind."

For more citations from the Fathers of the Church in support of the catholicity of Lutheran doctrine, visit my blog Lutheran Catholicity (click on post title to view).
Posted by Acroamaticus at Friday, November 12, 2010

Email ThisBlogThis!Share to TwitterShare to FacebookShare to Pinterest
Labels: Church Fathers, Justification, Roman Catholicism, Why I Am Not Roman Catholic

Are you and your co-religionists paraplegic, Father, since you seem to insist _SO_ much on this man's special or peculiar condition? :-| Are you in the same condition as him, unable to move your arms and legs? Are your limbs also fixed on a cross? Or what gives, then? :-\

Also pay attention to Chrysostom's words: but the One who knew his heart paid attention not to the words, but to the attitude of mind : Inner transformation is being spoken of here (a change of the mind's attitude, or meta-noia).

"pay attention to Chrysostom's words: but the One who knew his heart paid attention not to the words, but to the attitude of mind : Inner transformation is being spoken of here (a change of the mind's attitude, or meta-noia)."

Precisely Lucian. Whyever would you think the Lutheran doctrine of salvation excludes repentance, in the Biblical sense of metanoia?

The example of the "good thief" cannot be used as an argument against purgatory, nor can Chrysostom's words. If you read my latest postings on the subject at scecclesia.com you will see that Purgatory has nothing to do with "time" or a "delay", nor even with the necessity of penitential works (which is Chrysostom's point).

The "transforming purification" of purgatory is (if you follow Pope Benedict's interpretation of the doctrine) nothing other than the face to face encounter with the Lord. The thief experienced this encounter by literally being "crucified with Christ". Martyrs also experience this encounter in their moment of death, which is why the Church teaches that there is no need for further purification: they have definitively denied themselves, taken up their cross and followed him into the Beatific Vision.

I'll take that as a compliment, David.

But by going off on a tangent in regard to the time factor I think you're missing my main point, David, which is that the penal element of purgatory is clearly at odds not just with JBFA but with a sound doctrine of the atonement.

And, if I may be so candid, I think that there is a space here for some dialogue. See my comment on your previous post.

Paul says to the believing Corinthians, "we will all be changed--in a flash, in the twinkling of an eye, at the last trumpet... the dead will be raised imperishable, and we will be changed. For the perishable must clothe itself with the imperishable, and the mortal with immortality." (1 Corinthians 15:50-53, NIV1984). "The sting of death is sin," but "death has been swallowed up in victory" because Christ cleanses us from all sin, and he "gives us the victory." (Ephesians 5:26-27 and 1 Corinthians 15:54-57, NIV1984).

Thanks Rick.
It's hard to think of time in purgatory being compatible with the victory our Lord has won for us.
Looked at the new 2011 NIV yet, btw?

Mark, I looked briefly at the 2011NIV, and have no praise to offer. I suspect that many of these new translations are more about subtly changing the meaning, than about clearly conveying God's meaning. If only the one Christian Church would produce one beautiful and accurate English translation that all English speakers should use. Also, it would seem fitting if the proceeds from the sale of the Bible (perennially the best selling book) would go to the benefit of the Church and not secular media companies. Just my thoughts.

I'm inclined to agree with you on the matter of some benefit from the sale of Bibles going to the church, Rick. And I certainly agree with you on the desire for a universal English translation. I guess the lack of this reflects the fracturesd state of the church in the Anglosphere, as well as the profits to be made by publishing companies bringing out their own copyrighted translation.


I haven't had the chance to look deeply into the new NIV yet. There was some noise of Veith's blog about it, but I'm hoping someone from the WELS, with its commitment to eh NIV, might do a comparison.