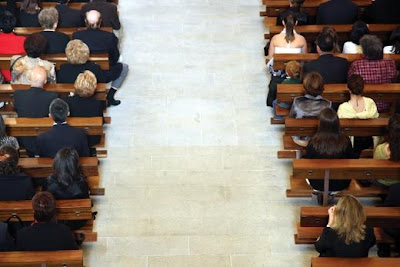 The following report concerning the state of decline of The Episcopal Church (the American branch of the worldwide Anglican Communion)recently appeared in The Church of England Newspaper. For those who don't keep up with events in Anglicanism, it should be noted that The Episcopal Church has been racked with division over matters such as the recognition of homosexual relationships and the related consecration of at least two openly homosexual clerics as bishops. The latter development has fractured the worldwide Anglican Communion, leading some orthodox bishops from Africa, Asia, Australia and South America to refuse to attend the last Lambeth Conference of Anglican bishops; they instead held their own conference in Jerusalem in 2008 to plan the future of orthodox Anglicanism (GAFCON = Global Anglican Futures Conference). The usual dissident rump, you might think? Not at all - the bishops present at GAFCON represented more Anglicans than those present at Lambeth. These bishops contend that events in The Episcopal Church reflect not just a confusion over ethics, but a different understanding of the Gospel which reduces the full orbed Biblical message of law and grace to an agenda of social inclusion as defined by Western liberals.

Those arguing for liberalisation of the church's ethical teaching believe that some accomodation of the church's message to the conventional wisdom of secular liberalism is necessary for the church to survive (shades of Schleiermacher!). This report most definitely indicates otherwise - when the church mirrors the world too closely, those in the church wonder why they should continue to belong to it, and those outside it have no compelling reason to enter it. And a church absorbed by debate over these issues to the point of division, when its foundations are already cracked by decades of allowing the accepted standards of authority (for Anglicans: the Bible, Tradition and Reason) to be questioned, cannot stand.

"THE EPISCOPAL Church continues in its course of a steep decline in the wake of its divisions over doctrine and discipline, with the national office reporting that in 2009 average Sundayattendance (ASA) fell by three percent to 682,963.

However the Church’s balance sheets remained strong with the value of the total investments of congregations growing by £172 million to £2.24 billion.

The median average Sunday worship attendance for the Episcopal Church’s 6,895 churches fell to 66. The numbers show a cumulative loss of over 19.3 per cent in ASA from 2002-2009, Canon Kendall Harmon of the Diocese of South Carolina noted. “This is a cataclysmic decline that suggests the immediate need for an all-hands-on-deck leadership summit focusing entirely on the issue of evangelism and parish health. Not only is the TEC leadership not doing this, the fact that they are not doing it is not even bothering them — a truly tragic situation,” Canon Harmon noted."

Why should this concern Lutherans? As Sasse noted on many occasions, in the (post)modern world the churches all face the same crises in their lives, there is no safe haven - not even Rome, or the Eastern Orthodox resident in the West, will be able to avoid the challenges presented by the wider acceptance in the West of homosexuality as a valid, God-pleasing alternative lifestyle...and nor will the various Lutheran church bodies. The Anglican Communion represents, as Bishop FitzSimons Allison has noted (see link to his essay in the right hand column), a sort of "canary in the coalmine" of contemporary church-society relations, giving advanced warning of the toxic dangers facing all of us.