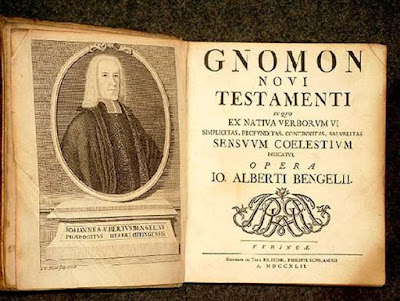 A short while ago I speculated on this blog that while e-readers like Kobo and Kindle might not kill the book, the advent of Google Books and such-like threatens the existence of second-hand bookshops, at least as far as theology goes (I suppose collectors will continue to buy old books, but that's a part of the market I'm not familiar with. I don't have the income or space to collect books as an investment or a hobby, I buy only what I really want to read). Here's an example of what I mean. I've long wanted to study Johann Albrecht Bengel's Gnomon of the New Testament (Bengel, 1687-1752; Gnomon 1742). It's been on my on my wishlist for several years, and eventually I may have tracked down an affordable reading copy through the American Book Exchange or similar. Now I don't need to - Bengel's Gnomon is available at Google Books.

Bengel has a good claim to be one of the most remarkable theologians of the Lutheran Church (the fact that he isn't generally recognised as such probably has to do with a particularly eccentric aspect of his theology, which we'll come to shortly), and the Gnomon is his commentary on the New Testament. In fact, through his authgroship of the Gnomon, Bengel could be regarded as the pioneer of the modern Bible commentary.

And as if that wasn't enough of a contribution to theology for one man, he is also generally credited with inaugurating the salvation-historical interpretation of scripture. This is the understanding that while the Bible contains many genres of writing, it is above all else a meta-narrative, the great story of God and man and God's battle with the Devil for mankind's soul, a story which is yet to end (though we already know how it's going to turn out).

Bengel's insights in these areas progressed the science of biblical interpretation in Lutheran circles and beyond. He was also an adherent of the historical-grammatical method of interpreting scripture which Luther advocated. As an exegete he was second to none in his own lifetime and can still be read with profit today. It is said that Bengel could convey in two sentences what it took others two pages to say. John Wesley's Notes on the New Testament, which were widely-read and extrememly influential in the English-speaking world long before Bengel was translated, were largely a paraphrase of Bengel.

Mention of Wesley leads us to another important aspect of Bengel's life and work - he was a Pietist, and it was the confluence of his pietism with his salvation-historical reading of scripture which threw up one of the most interesting, if erroneous, of his beliefs: his chiliasm or millenialism, viz. the belief that Christ would soon return to establish an earthly kingdom and reign with the saints for a thousand years before the final judgment. This is what actually piqued my interest in Bengel's work way back in seminary. You see, dear reader, the influence Bengel's chiliasm extended even into the confessional Lutheran circles in Germany which had arisen from the ashes in response to the 1817 celebration of the 300th anniversary of the Lutheran Reformation - and this influence was in spite of the Lutheran confessions' unequivocal condemnation of such views - such, we must understand, was the respect that the name of Bengel invoked. Apocalyptic thoughts were in the air at the time - Napoleon had been regarded by many as the anti-Christ himself, a belief Tolstoy placed into the mouth of one of his characters on the very first page of his epic novel, War & Peace, which explores the impact upon several Russian families of Napoleon's invasion of that vast land.

And mention of Russia enables me to draw together the final threads of this post and explain further the genesis of my interest in Bengel - for those who are still reading. A group of earnest confessional Lutherans - Old Lutherans as they were known - who had been misled by their respect for Bengel to accept his millenial views, to the extent that they believed that Christ would return in 1836 (even the date is often attributed to Bengel, I want to determine if this is so) sought to emigrate to Russia which, being in the East, they reasoned, would be one of the first lands on earth from which the Second Coming would be visible. Their leader, August Kavel(1798-1860) attempted to obtain the necessary passage for his group in Hamburg, but came up empty. However, all was not lost, as while he was in that great maritime city he learned of an agricultural settlement in the free colony of South Australia being organised by a pious Scottish Presbyterian, George Fife Angas. The emigration passed through much travail, but the long and short of it is that Kavel and 596 devout Lutheran souls landed late in 1838 in South Australia, thus establishing the Lutheran presence in this country*.

So, in a roundabout way, in addition to all his other notable achievements, if it were not for Johann Albrecht Bengel the Lutheran Church of Australia might never have come into existence; or if it did, it almost certainly have been cast in quite a different mould from what it was and is - God really does work in mysterious ways!

Undoubtedly, Kavel's people would have been greatly edified by Bengel's commentary on the New Testament as mediated to them through Pr Kavel's sermons and devotions. But, as hinted, Bengel's influence on the infant Australian Lutheran church was not entirely wholesome; I might blog about that in the near future. For now, I'm off to peruse the Gnomon. Auf wiedersehen!

*Actually, there were two Lutheran missionaries already in Adelaide when Kavel arrived, working with aboriginal people on the banks of the Torrens River. And there was a recently established colony of Lutheran artisans in Brisbane, or Moreton Bay as it was then known, sponsored from Germany by "Father" Gossner as a mission settlement to attract the native peoples to Christianity. But let's not let facts get in the way of a great story! Perhaps we'll have time to explore those interesting but neglected figures another time).
Posted by Acroamaticus at Monday, September 13, 2010

Acquaintance of mine through a mennonite website,lives in QLD and he told me that his Lutheran ancestors settled in QLD in the 1860s',although he himself had grown up Plymouth brethren (dear me) then became RCC ,beachy amish and now back to being asn Anglican. I nearly said he could have had the best of both worlds by amalgamating his love of liturgical services with his AnaBaptist leanings and worship in the only Australian church founded by refugees fleeing religious persecution- the LCA

Well, there are surely worse places he could end up than the LCA, Matthias. Should he need directions to a liturgical Lutheran congregation, put him in touch with me.