Slow Slide into a Culture of Death 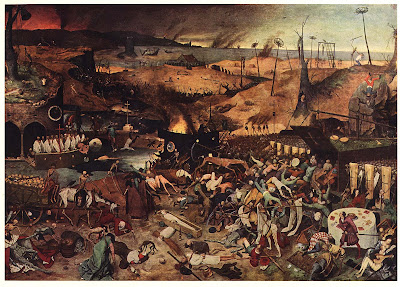 In the beginning, Australian advocates of euthanasia promoted it as a humane exit for people with terminal illnesses. Now, apparently, euthanasia is becoming acceptable to its advocates as a way out for people who are simply "tired of life" (read:depression!), and now for the first time we have clear evidence that people who take their lives through a self-administered dose of the barbiturate nembutal, as recommended by euthanasia advocates, are often in their 20s and 30s. Click on the post title to read an article about these findings in yesterday's Sydney Morning Herald.

Note: Euthanasia is illegal in Australia, as is assisiting people to accomplish it, even through the electronic or telephonic provision of advice on how to do so. Actual prosecutions, however, have been negligible. One can perhaps understand the difficulties the authorities face in undertaking such prosecutions, but they must be alert to the development of a de facto tolerance of euthanasia which will further our slow slide into a culture of death.
Posted by Acroamaticus at Tuesday, February 16, 2010

How does anyone who supports euthanasia, or even anyone who is ambivalent towards it, counsel someone not to commit suicide?

In the end, I think this philosophy undermines all forms of self-sacrifice. Accordingly, Christ apparently ought to have killed himself in the garden the night before the crucifixion. There is absolutely no room for the "for you" from God; they would tell Him not to bother.

Precisely, Phil, why counsel to preserve life when life is not valued as a gift from God, or even as a positive in itself? This is what I mean by the culture of death.

Regarding the 'slow slide' of the West into a culture of death, in the Netherlands, where euthanasia was de-criminalised in 2002 in specified cases of unbearable physical suffering, there is now a movement to extend de-criminalisation to all those over 70 who are 'tired of life'.

Once you deny God's existence, and then you look around and realize that science hasn't made good on the modernists' promises to take away all suffering, suffering becomes absolutely intolerable (one might say insufferable...). The only answer to an intolerable thing is to cease to tolerate it, which may mean ceasing to exist, or at least so the atheist thinks.

I suspect that, while we'll continue to see the advance of the "culture of death," we're also going to see people who, either because their natural squeamishness towards suicide holds them back, or because they're in a state of relative temporal happiness, maintain inconsistency and refrain from killing themselves while still holding that suffering is absolutely intolerable. The next question is how this inconsistency will erupt. A lack of charity is probably the obvious answer, but I think various forms of extreme escapism also result (quite Gnostic), and possibly other things too...

I wonder if Dr Phiol counsels or refers those "tired of life" to a counselling service ,or is he 'assisting 'them to Exit. Whatever this man has lost perspective and is an example of moral and ethical bankruptcy . Francis Scaheffer said that God judges a culture, either by acting directly upon it,such as bringing the Assyrians upon idolatorous israel, or by turning His back upon that culture- and that culture goes downhill -such as Ancient Rome. God is also expecting us His Peoplr to maintain our witness and be beacons of light to those in the darkness-Dr Phil or others

Thanks for expanding on your thoughts, Phil. I agree that rejection of suffering and denial of God are linked, or rather, the refusal to accept suffering. Not co-incidentally, there is nothing more harrowing than to be present at the death bed of a non-believer.

I posted a response to clarify who i meant by dr phil and it was in relation to the misguided secularist -once a Lutheran(?)-phillip nitschke,not the TV Dr 'what were you thinking " Phil,who i palce min the same category as the Oprah show-i'd rather have apencil in the eye than suffer these two moralising aging New Agers

Ah, gotcha, Matthias (light goes on!). I didn't get your clarifying comment for some reason. No, I don't think that "Dr Phil" was ever Lutheran, either.

Check this out. The same evil is expanding in the Great White North:
http://tinyurl.com/ybu3u9h

This is frightening stuff.

Thanks Jon. I suspect that it is no coincidence that Quebec is ahead of the rest of Canada on euthanasia and also the dissolution of Christian belief and culture has proceeded much farther there than in the rest of the country - or so I'm told.

Of course this DUST OF DEATH is not helped when churches such as mine New Community Church Ringwood-yes i will name it,did not ,as a church entity ,make comments about or do other protests at the Abortion law reform two years ago. Individuals may have such as myself or others did
I had a friend in a Bible Study group,a scientist,say that we -the church -should have stood up.
I hope that people in the West Metropolitan electoral province of the legislative council( our State upper House ) who are pro-life,will carry out a campaign against the greens ,especially their current sitting member Colleen Heartland.

It's greatly disturbing that many consider the "loss of dignity" during those times of frailty and sickness as a strongly valid reason to terminate life. Inability to care for oneself, distressing physical decline, incontinence and of course pain, are bundled to indicate loss of human dignity. This is terribly sad. Many of us have been around desperately ill people whose bodies no longer function in acceptably "dignified" ways, but they remain precious. The very least we can offer during these hard and messy times is compassionate care and to hold fast to the essential dignity of the suffering. We serve the dear Christ in one another, and perhaps in a special way, when we serve the dying.

Am a bit late for Doctrine Leads to Doxology, but will say that I found that writing years ago when reading CSL and felt relieved and joyful. Good devotional books are hard to come by and when the children were young, material for children was woeful. Pietistic, legalistic and badly written. Then we found Normal Habel's Purple Puzzle Tree. . . I suspect you are far too young to know of this treasure.

Unlike Lewis I did not smoke a pipe - but while reading some theological book, I could sometimes be found with a cigarette and if it was late in the evening, perhaps a sherry as well. And yes, the heart could sing unbidden under these conditions.

Once I took a copy of the Lutheran Theological Journal to the maternity ward where I was to have one of my children. They used to keep us in hospital for about a week then and a girl just needed a good read when baby was asleep. I ended up keeping my LTJ inside a women't magazine because friendly staff would cheerily ask what I was reading and it was just too complicated to precis "Providence and Worship" (or such).

Thanks for you eclectic bits and pieces. Wonderful to browse in such pasturage.

We enjoyed a beautiful Ash Wednesday service. A blessed Lenten-tide to you.

PS Could I please be called just Erika (not Erika.hoffmann)

Thank you Erika for those beautiful comments on this crucial subject and your delightful reminiscenecs inspired by 'C.S. Lewis on Doctrine and Doxology' - it's never too late to comment.

I'm so glad to have Australian Lutherans reading my humble blog! I think you've commented before, yes? Please continue to read and comment, and thank you for your kind words re the blog.

I have never come across the 'Purple Puzzle Tree', but perhaps that is not so much due to my age as to my non-Lutheran upbringing? I have met the author, though, and a very significant figure he is in modern Lutheran history, both here and in the US. Not many scholars can write a children's book and a highly regarded commentary on Job!

PS
Erika, I'm afraid I can't change the way your name displays here from my side of things, it has to do with how you are logged on to blogger, but we will certainly call you Erika.

All summed up via: onwards christian soldiers forever marching into war and imperial conquest.

And shown via this one stark image.

And why not try The Criminal History of the Papacy by Tony Bushby?

Meanwhile christian America accounts for over 50% of the worlds armaments trade. Its dominate institution is the military-industrial-"entertainment" complex, the values of which permeate every aspect of USA culture. The "culture" of death made very manifest and growing more powerful every day.

Th examples you cite are not an argument against Christian theism per se, if that is what they are intended to be, but only indicate that Christians are not infallible in their moral choices pertaining to war in every instance.

Having said that, I share your abhorrence of violence and war, and acknowledge that too often particular churches have been less than discerning in their support of the nation states they existed in.