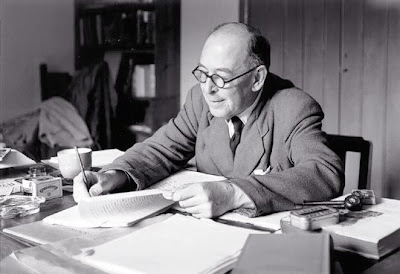 "For my own part I tend to find the doctrinal books often more helpful in devotion than the devotional books, and I rather suspect that the same experience may await many others. I believe that many who find that 'nothing happens' when they sit down, or kneel down, to a book of devotion, would find that the heart sings unbidden while they are working their way through a tough bit of theology with a pipe in their teeth and a pencil in their hand."

C.S. Lewis, from his introduction to Athanasius’ On the Incarnation.

That the study of doctrine ought to lead to doxology, or the praise of God, is a truth that has been too readily forgotten by Christians. That there is nothing like the disciplined study of Christian dogmatics to expand the mind and lead on to praise of the the Holy Trinity is one of the first and greatest truths I discovered when I returned to the Christian faith. To take what our friend Richard wrote in the last post regarding the Gospel and apply it also to this subject, it could be said that without the firm backbone of doctrine, Christianity becomes a flabby, spineless, emotion-based pietism, which is just the type of Christianity I encountered and rejected during my youth.

Well, having said that, I can only add that I was naturally delighted to stumble across this quote from C.S.Lewis saying the same thing!
Posted by Acroamaticus at Tuesday, February 09, 2010

Well i finished the Heidelberg Catehcism last year and have begun again ,as well as Luther's Small catechism .I study them both on Sundays before or after church.Puts the baptist liturgy in perspective.Sorry that was an oxymoron>

Good solid material, Matthias. Melanchthon's Apology for the Augsburg Confession, an expansion of the Augsburg in response to RC criticism, and Luther's Smalcald Articles also make for good study.

Preaching is often criticeds these dyas for being "light", but with a large majority of Christians seemingly ignorant of doctrine adn unwilling to learn, the blame can't entirely be placed upon the preacher. Preachers of previous eras had the luxury of thoroughly catechised hearers.
Indeed, it's interesting if one reads the sermons of the great preachers between the 17th-19th centuries one immediately notices how theological they are; they assume a knowledge of the articles of Christian doctrine that one simply cannot asusme these days. Even Wesley's sermons, which were often preached to working-class congregations, are theological meditations rather than emotional appeals,as evangelical preaching became in the 20th century.