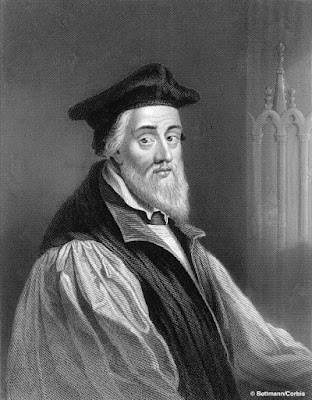 "To know how we obtain our justification, it is expedient to consider, first, how naughty and sinful we are all, that be of Adam's kindred; and contrariwise, what mercifulness is in God, which to all faithful and penitent sinners pardoneth all their offences for Christ's sake. Of these two things no man is lightly ignorant that ever hath heard of the fall of Adam, which was to the infection of all his posterity; and again, of the inexplicable mercy of our heavenly Father, which sent his only begotten Son to suffer his most grievous passion for us, and shed his most precious blood, the price of our redemption.
...The commandments of God lay our faults before our eyes, which putteth us in fear and dread, and maketh us see the wrath of God against our sins, as St. Paul saith, Per legem agnitio peccati, et, Lex iram operatur, and maketh us sorry and repentant, that ever we should come into the displeasure of God, and the captivity of the Devil. The gracious promises of God by the mediation of Christ showeth us, (and that to our great relief and comfort,) whensoever we be repentant...we have forgiveness of our sins, [are] reconciled to God, and accepted, and reputed just and righteous in his sight, only by his grace and mercy, which he doth grant and give unto us for his dearly beloved Son's sake, Jesus Christ; who paid a sufficient ransom for our sins; whose blood doth wash away the same; whose bitter and grievous passion is the only pacifying oblation, that putteth away from us the wrath of God his Father; whose sanctified body offered on the cross is the only sacrifice of sweet and pleasant savour, as St. Paul saith: that is to say, of such sweetness and pleasantness to the Father, that for the same he accepteth and reputeth of like sweetness all them that the same offering doth serve for."

This is an extract from Cranmer's annotations to The King's Book, the popular title for "A Necessary Doctrine and Erudition for Any Christian Man; Set Forth by the King's Majesty of England," (1538). This can be found in the Parker Society volume of Cranmer's writings (Cambridge University Press, 1840). It has been said by at least one scholar that Cranmer's Book of Common Prayer is the highest liturgical expression ever given to the doctrine of Law and Gospel.

Note: Our erstwhile Lutheran cum Roman Catholic interlocutor has conceded that the Law-Gospel hermeneutic is also known outside the Lutheran confession, although he believes this is due to Lutheran influence. I agree, of course, that Lutheran influence accounts for much of the knowledge of this doctrine in the Reformed, Anglican and Baptist confessions; after all, Martin Luther was God's instrument to restore the clear knowledge of Law and Gospel to the church. But, it seems to me that this factor alone does not account for the widespread acceptance of this doctrine. After all, a Presbyterian, an Anglican or a Baptist would not accept a doctrine merely on the basis of 'what Luther said'; in accordance with the foundational principles of their own confessions they would test this doctrine against the scriptures, and only if it passed that test would it be received.
And then, there is also a tradition of the Law-Gospel hermeneutic in these confessions themselves which does not need Lutheran influence to sustain it.
And further, there are the relatively unlearned and unread proponents of the Law-Gospel doctrine, such as John Bunyan, from whom we shall quote in due course.
Posted by Acroamaticus at Tuesday, February 23, 2010

albrecht durer's diary -he of the etchings fame- who lived at the same time as Luther,records his anxiety and of those around him ,at the time that luther was in protective custody of the Elector and whn luther was facing the Diet of Worms.
I think for a great many Protestants-Lutherans and other Confessionals excepted-the fact that we are now under Grace and not under law ,has allowed a slackness to come in to those churches in their practice.
I was talking to your Lutheran who swam the Tiber about my church were having a Christmas luncheon on the Sunday before Christmas -but no service.He made the valid point ,that surely being sunday -The Lord's day-would they not also want and need to worship the Lord? Me on that sunday,i was singing with our mutual friend at his church and came out still singing a Tsaize hymn all the way back to my place-Magnificat

Being under grace does not excuse one from worship without a valid reason. In that case, the old Adam is raising his head and needs to hear the Law. The distinction between Law and Gospel, properly understood, does not lead to anti-nomianism.
I am surprised that a Baptist church would forego Sunday worship for Christmas worship; I guess they've forgotten their Puritan roots(?).

What roots ? Puritans "the praying privates and preaching captains " of the New Model Army would raise up from their graves on the battlefields of naseby and Marston Moor to say that man's chief end is to enjoy God and to worship Him for ever.
They would also ask a great many Bappos why is there no preaching on sin and judgement and Last things and probably say "what is this strange talk on realationships and Jesus as a role model." Heavens know what they would think of the Prosperity Gospel. But then they are probably saying it amongst themselves and to their Lutheran,Reformed ,Catholic and anaBaptist neighbours as they sit ,as athletes who have completed their Race,witnessing us, as we run the race set before us, and await the Judge's Decision

That's interesting. In the US Baptists over the last several decades have been recovering their roots on both the Arminian and Calvinist sides, particularly in the Southern Baptist Convention, which if I'm not mistaken is the largest Protestant church body in the US. Yet that movement has had little impact amongst Australian Baptists (?). Of course, I would like to see all baptists renounce their sacramental doctrines and become Lutheran, but that ain't going to happen any time soon, so failing that, one might as well have Baptists who know and own their heritage, right? At least then we know who we are talking to, the heirs of John Bunyan et al

Ah my hero John Bunyan the tinker of Bedford ,who' last sermon -preached after riding to act as peacemaker in congregants family quarrel and who subsequently caught pneuomonia-was about Christians needing to show love to one another.His boom GRACE ABOUNDING TO THE CHIEF OF SINNERS should be required reading by all baptists-it would remove the theology of glory except in the cross of Christ-.
Let's quote the farewell speech of his character Mr Valiant for Truth from his classic the pilgrim's progress-which i learnt on my mother's lap-
"I am going to my Father's, and though with great difficulty I am got hither, yet now I do not repent of all the trouble I have been at to arrive where I am.
My sword, I give to him that shall succeed me in my pilgrimage, and my courage and skill, to him that can get it.
My marks and scars I carry with me, to be a witness for me, that I have fought his battles, who now will be my rewarder.
When the day that he must go hence, was come, many accompanied him to the river side, into which, as he went, he said, "Death, where is thy sting?"

And as he went down deeper, he said, "Grave, where is thy victory?"

So he passed over, and all the trumpets sounded for him on the other side. " Amen and Amen. i dedicate this in memory of my friend and former colleague Brian -a Catholic-who died last night in the sure and steadfast hope of the Resurrection