Newman on the Vincentian Canon

I have often heard from the lips of Lutherans on the way to Rome (or read from their pens, on their blogs, etc) that they have discovered through reading the Fathers that the Lutheran faith is not catholic and that Luther was guilty of introducing doctrinal innovations into the faith which were unknown to the early church (ironic, eh?). The assumption (no pun intended!) behind this argument is that the early church, being closer in time to our Lord and the Holy Apostles, exhibits a purity of doctrine which ought to serve as a model for us today. That idea certainly presents with a tinge of piety; if only it were so! But it is a questionable assumption, and one only has to consider the tenor of some of the writings of the sub-Apostolic Fathers ( those closest in time to the Apostles) to see how the light of the Gospel was dimmed in just one generation, not extinguished, mind you, but certainly dimmed. But I will leave that discussion for another time, back to our Lutherans heading Romewards. Usually, mention is made by these folk of the rule of Vincent of Lerins (c.400-450AD). Vincent's rule, as written in his Commonitorium, is that "care must especially be taken that what is held is that which has been believed everywhere [ubique], always [semper], and by all [ab omnibus]."

The appeal to the Vincentian Canon has always seemed to me to be a facile one; in theory it sounds good, but as suggested one only has to actually read the Fathers to discover that it is in fact very difficult to determine what was believed quod ubique, quod semper, quod ab omnibus in their time. I was therefore interested to come across the following by John Henry Newman, a writer generally revered by converts to Rome, on the subject of the usefulness of the Vincentian Canon, authored while he was an Anglican on the way to Rome:

"It does not seem possible, then, to avoid the conclusion that, whatever be the proper key for harmonising the records and documents of the early and later Church, and true as the dictum of Vincentius must be considered in the abstract, and possible as its application might be in his own age, when he might almost ask the primitive centuries for their testimony, it is hardly available now, or effective of any satisfactory result. The solution it offers is as difficult as the original problem."

As stated in the previous post, I find Newman's proposed solution of the problem of catholicity misleading and even dangerous, but that does not mean that his view of the Vincentian Canon is not valid and does not deserve to be better known. 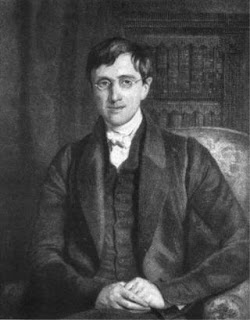 From An Essay on the Development of Christian Doctrine by John Henry Newman(London: Longmans, Green and Co. 1927 p. 27). The portrait to the left is from about the time when Newman wrote this work (c.1842-45).
Posted by Acroamaticus at Wednesday, October 07, 2009