"Nothing is more characteristic of the Apostle’s sacramental teaching as a whole than his use of the term fellowship (Greek koinonia). In baptism we are united with Christ in his death and risen life; in the Lord’s Supper we share in his body and blood. This is the plain sense of 1 Corinthians 10:16...

...Provided we insist on the importance of a living communion by faith, we may agree with Hauck’s interpretation: ‘Bread and Wine are for Paul bearers of the presence of Christ’ (F. Hauck, article in Kittel’s TDNT)."

Reader's Note: Koinonia is usually translated as "communion with", "sharing in", & "participation in" in English New Testaments - MH. 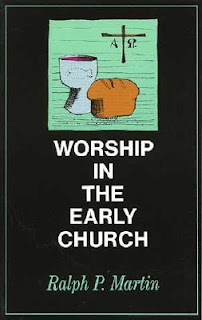 Gloss: Ralph P. Martin was Professor of New Testament and Director of Graduate Studies at Fuller Theological Seminary in California and is presently Distinguished Scholar in Residence at that institution. He holds a Ph D in New Testament from King's College, University of London and has contributed to the Word commentary series, amongst other publications.
I do not know what denomination Martin belongs to, but Fuller is progressively evangelical (some would say liberal evangelical), and Martin would certainly have no interest in defending the Lutheran doctrine of the sacramental union in the Lord's Supper. But in this little volume he comes very close to the basic Lutheran position on the Lord's Supper, simply by taking 1 Corinthians 10:16 in its "plain sense", that is, interpreted literally and not through the prism of Calvinist dogma. Read in context, one will see that Martin might quibble at some of the protective fences Lutherans have traditionally built about their interpretation (communion of the impious, for e.g.), but this is nevertheless a momentous confession from a distinguished evangelical scholar.
Posted by Acroamaticus at Wednesday, July 15, 2009

I'm fairly sure that Ralph Martin is a Baptist.

Thanks for that information, Peter.
My guess was either Baptist or, given his English connections, Methodist. In either case, it's an interesting little book for one with such strong Evangelical credentials.