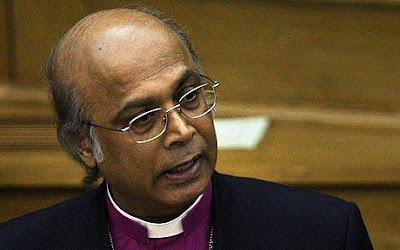 At last, a "confessing movement" which seeks to call mainstream, historically Protestant Anglicanism back from its liberal drift to its confessional, biblical roots has come forth as a result of the GAFCON meeting in Jerusalem last year, and it has the Queen's support, no less.

A leading light in the movement is Michael Nazir-Ali (pictured), the Pakistani born Bishop of Rochester (soon to retire from that position) who was considered one of two prime candidates for the position of Archbishop of Canterbury in 2003 (unfortunately Rowan Williams was appointed). Bishop Nazir-Ali has been a vocal contender for the traditional Christian positions on marriage and family, has publicly called on practising homosexuals to repent, and has warned of the dangers to a cohesive British society that stem from Canadian style multi-culturalism, especially in view of Britain's large Islamic population (Nazir-Ali's father converted to Christianity from Islam, and Nazir-Ali himself holds dual Pakistani-British citizenship). Nazir-Ali's pronouncements on these subjects have been as clear and bell-like as Rowan Williams' have been obfuscating and muted.

There has never been any doubt that Bible-honouring Anglicanism would survive, but at times it has not seemed clear how - but now the inception of this movement may be the catalyst for positive change and renewal.
Lutherans, watch and learn! This development is not without relevance to us.
Click on the title to go to the UK Telegraph's story.
The website address of the Fellowship of Confessing Anglicans is http://fca.net/
Posted by Acroamaticus at Thursday, July 09, 2009

Email ThisBlogThis!Share to TwitterShare to FacebookShare to Pinterest
Labels: Anglicanism

Indeed, couldn't agree more, MCB. My interest stems from my former Anglican background, not from any naive hope of rapprochement between the two confessions. But it *is* a good development, all the same.

However, everything that is good about Anglicanism, like the Prayer Book and most of the 39 Articles (which ofcourse owe quite a bit to the Augsburg Confession), only makes those points where we disagree stand out all the more starkly.

It strikes me that the relationship between Lutherans and Anglicans is a little bit like that between Australians and New Zealanders, or the English and the Scots for that mater: the superficial genetic similarities obscure profound differences to all but the most knowledgeable of observers.