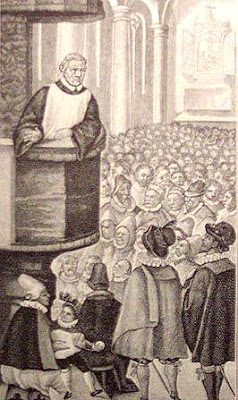 Extract from a sermon by Martin Luther on Trinity Sunday (Church Postill, 1522)

"Today we celebrate the festival of the Holy Trinity, to which we must briefly allude, so that we may not celebrate it in vain. It is indeed true that the name "Trinity" is nowhere to be found in the Holy Scriptures, but has been conceived and invented by man. For this reason it sounds somewhat cold and we had better speak of "God" than of the "Trinity."
This word signifies that there are three persons in God. It is a heavenly mystery which the world cannot understand. I have often told you that this, as well as every other article of faith, must not be based upon reason or comparisons, but must be understood and established by means of passages from the Scriptures, for God has the only perfect knowledge and knows how to speak concerning himself.
We can... have no surer foundation for our belief in the divinity of Christ than that we enwrap and enclose our hearts in the declarations of the Scriptures. The Scriptures gradually and beautifully lead us to Christ; first revealing him to us as a man, then as the lord of all creatures, and finally as God. Thus we are successfully led to the true knowledge of God. But the philosophers and the wise men of this world would begin at the top and so they have become fools. We must begin at the bottom and gradually advance in knowledge, so that the words of Proverbs 25, 27 may not apply to us: 'It is not good to eat too much honey, nor is it good to seek one's own honour.' "

Comment: Aside from what Luther has to say on the Trinity, which is only brief and en passant , what I find especially valuable in this sermon extract is his use of scripture passages to prove articles of faith and his exhortation to his listeners to do the same, in preference to relying overly much on human reason to establish doctrine in the manner of medieval scholasticism (and later Roman Catholicism, we might add).
Luther uses the following proof-texts in the introductory portion of this sermon where he discusses the doctrine of the Holy Trinity before moving on to his lectionary text, John 3:1-15 (which I also preached on today): John 1:1-3; Psalm 110:1; Psalm 8:4-8; Ephesians 1:20; Colossians 2:9-10; John 5:19-23; Romans 1:2-4; John 16:13; John 17:1-5; Psalm 2:8; Psalm 45:6-7; Genesis 1:2; Psalm 33:6; Psalm 139:7-8.
Some of these proof-texts – and Luther is not ashamed to refer to them as such in the text of his sermon – are the classic loci for the Trinity going back to patristic times, while others seem to be tangential. It would be a fascinating study, if one had the time as well as access to a decent theological library, to trace the subsequent use of these texts in Lutheran orthodoxy. Questions to answer would be: To what extent did Luther continue the patristic tradition of interpretation? To what extent did he inaugurate a new tradition of reading scripture texts?
It is known that catenae of quotations from the Church Fathers on scripture passages were handed down by scholars into medieval times; there also seems to be, from my limited reading, a similar practice in Lutheran orthodoxy in regard not only to the Fathers but also to Luther. We may, however, view this tradition with some ambivalence; to the extent that it preserved the patristic tradition of interpretation when the full works of the Fathers were not always available, it was indeed valuable, but to the extent that it prevented theologians from doing their own exegetical spadework, it was less so.
Posted by Acroamaticus at Sunday, June 07, 2009